Bulletin board for week of Dec. 15

Home » Articles » Bulletin board for week of Dec. 15 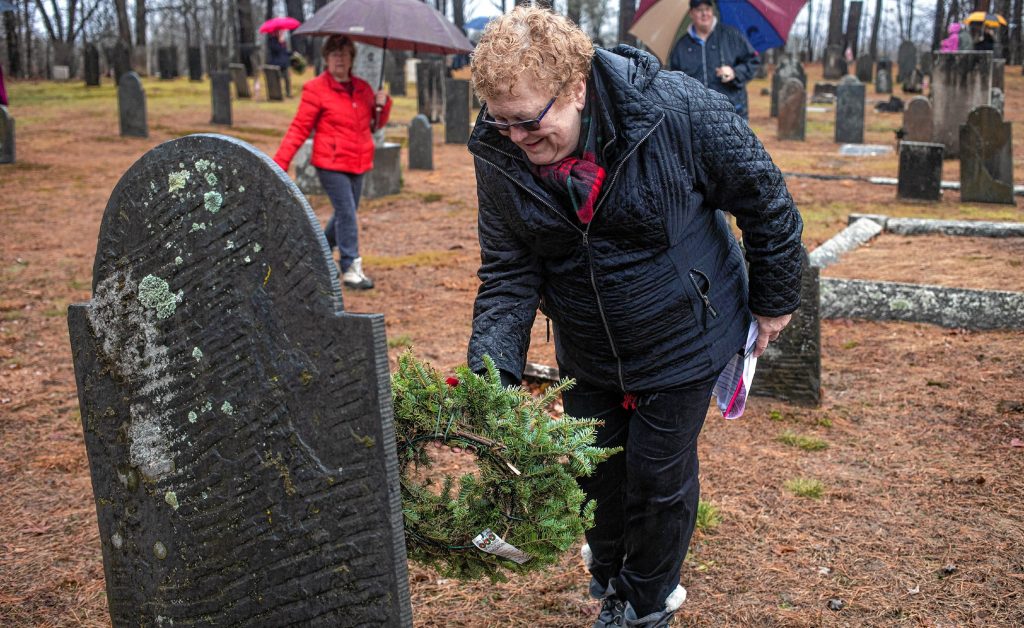 Daughter of the American Revolution Regent Kathleen A. Sternenberg of the Buntin-Rumford-Webster Chapter of the NSDAR places a wreath at a marker at the Wreaths Across America ceremony at the Old Fort Cemetery on Shawmut Street in East Concord on Saturday, December 14, 2019. The Buntin-Rumford-Webster Chapter of the Daughters of the American Revolution sponsored the event along with Naval Sea Cadets that placed 28 wreaths on veterans in the cemetery, including 13 from the Revolutionary War.

Join the Greater Concord Chamber of Commerce for a virtual forum on our regional and national economy on Thursday, Dec. 15 from 8:30 to 9:30 a.m. Guest speaker Brian Gottlob, Director of NH Economic and Labor Market Information Bureau, will share a big-picture view of where the U.S. stands on a possible recession, and what we can expect in N.H. for the coming year. Gain insight on regional economic trends to help inform your business activity and join the conversation with other leaders in the area. This online event is generously sponsored by Eversource Energy Services. Learn more about the following opportunities and register at concordnhchamber.com.

The Pierce Brigade, the membership organization dedicated to preserving the home and legacy of President Franklin Pierce, has adopted Old North Cemetery on North State Street as part of Wreaths Across America. Wreaths will be laid on the graves of 200 veterans located in the historic cemetery.

On Saturday, Dec. 17, 2022 at 10 a.m. the public is invited to join representatives from each of the eight military service branches as they place a commemorative wreath at the entrance to the cemetery, which will remain in place until spring. A Color Guard made up of members of the 6th New Hampshire Volunteer Historical Association will be in place during the ceremony. The event is rain or shine.

Old North Cemetery is the final resting place of those who served in such conflicts as the American Revolutionary War, the War of 1812, the Civil War and the Spanish American War. Old North cemetery is also where Franklin Pierce, the 14th President of the United States and a Brigadier General in the Mexican War is buried.

Wreaths Across America was founded in 2007 as a way to expand the annual wreath-laying ceremony in Arlington National Cemetery and support groups across the country wishing to pay tribute to the veterans who served their state and our nation. The Concord, NH ceremony is being held the same day that wreaths will be laid in Arlington National Cemetery.

Volunteers wishing to assist in the placement of wreaths on veteran’s graves are invited to join the Pierce Brigade on Dec. 16 at 10 a.m. in Old North Cemetery, which is located at 141 North State Street in Concord.