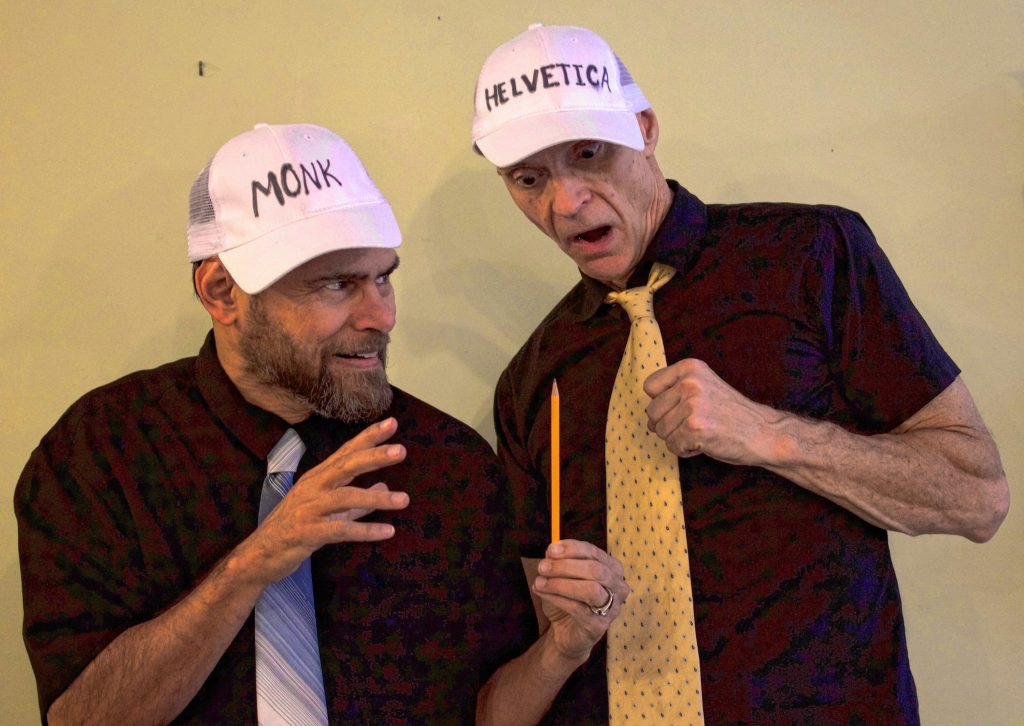 Update from May 19 at 2:30 p.m.: “The Community Players of Concord regret to announce that this weekend’s performance of Gutenberg! The Musical! at the Hatbox Theatre has been postponed due to a cast member’s illness.  (No, it’s not COVID!)  We hope to reschedule this production at a later date.  If you already have tickets you can hang on to them for the rescheduled performance, or you can return them for a refund from the Hatbox.  Thank you for your understanding.”

Doug Schwarz and David Peck spent a year rehearsing Gutenberg! The Musical! for its debut at the Community Players Studio in July 2015. They had no idea what kind of reception to expect. Though Schwarz was a Players veteran, Peck was a newbie with virtually no theater experience. But the two were lifelong friends, and their infectious stage chemistry brought the production to uproarious life before a standing-room-only crowd that almost never stopped laughing.

Flushed (and perhaps even a bit giddy?) with success, they decided to give the show another try before a wider audience. And so in February 2016 they reprised their performance for a sellout crowd at the Capitol Center for the Arts’ Spotlight Café – a crowd that was perhaps even more wildly enthusiastic than the first. Their enthusiasm not yet depleted, the pair brought Gutenberg! to the Hatbox Theatre in Concord’s Steeplegate Mall in May 2017.

Tickets are $22 ($19 for students, seniors and Hatbox members; $16 for senior members), available online at hatboxnh.com.

The Hatbox, with its intimate, stadium-style seating, may be the perfect venue for Gutenberg!, allowing each patron to catch every nuance of this fast-paced, quick-witted show. You’ll even be able to see the hats (trust us, it’s important).

But under the Hatbox’s COVID social distancing rules there are only about 50 seats in the theatre, and nearly every previous performance of Gutenberg! has been standing room only! So don’t wait – get your tickets now!

Gutenberg! The Musical!, by Anthony King and Scott Brown, was developed at the Upright Citizens Brigade Theatre in New York City, where it ran for over a year. The full two-act version premiered in London in 2006. A subsequent Off-Broadway production was followed by a six-month run at the Actor’s Playhouse, which was nominated for Best Musical by the Lortel and Outer Critics Circle Awards, as well as Best Book and Best Director of a Musical by the Drama Desk Awards. Regional and worldwide productions are ongoing.

And yes, it really is a show about Johann Gutenberg, inventor of the printing press. But it’s also about Bud and Doug, two wannabe playwrights who’ve written a show about Gutenberg – a show they’re convinced is the best musical ever written, ever! Now they’re doing a showcase for some really big Broadway producers. But can two guys with no set, no costumes and just a few props possibly stage an entire Broadway show? They can sure have fun trying – and so can you!