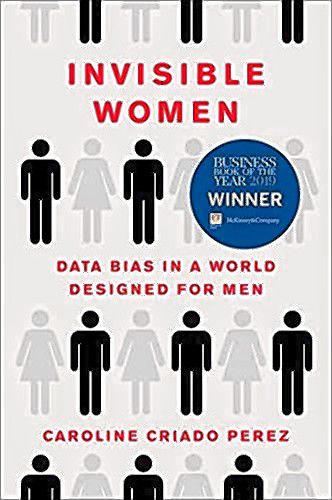 Every so often, a book comes along that you wish everyone would read. Invisible Women is one of those books. Are you a woman? Do you live with, work with, communicate with, or — heck — live in a community that includes women? Then this recommendation is for you.

Invisible Women is based on the premise that sex- and gender-based discrimination, whether overt or surreptitious, lurk behind nearly all facets of modern life. Criado’s work is about how gender discrimination happens, and why it matters. Her thesis: in a world that increasingly relies on data-driven decision-making, women are often excluded as data points. When women aren’t included in the processes of product design, city planning, policy-writing, hiring, or medical research, the result (naturally) is products, communities, policies, work environments, and medical interventions that privilege the needs of men over their female counterparts. Criado Perez has coined the term gender data gap to describe this phenomenon, and she supports its existence with examples and statistics from around the globe.

The gender data gap severely complicates the idea of “gender neutrality.” Criado Perez demonstrates that even phenomena that seem unbiased are, in fact, intrinsic to creating an uneven playing field for women. Take, for example, car safety ratings. It’s hard to imagine how a motor vehicle might be sexist — but drill down, and we learn that automobile design, from the position of the driver’s headrest to the distance between the seat and pedals, is based on the proportions of an average man. The U.S. didn’t start using crash test dummies with female proportions until 2011, and there’s still no government mandate to test vehicles against a pregnancy-mimicking crash dummy. Meanwhile, while women are less likely to be involved in a car crash than men, they’re 47% more likely to be seriously injured in a collision. Well over half of women in the third trimester of pregnancy don’t fit correctly into a standard seat belt, while car crashes remain the leading cause of fetal death resulting from maternal trauma. The gender data gap has real consequences. Excluding female data is literally killing women, and harming the economy for everyone.

Criado Perez demonstrates the effects of the gender data gap across fields: medications that don’t work because they were never tested on women patients; voice recognition software that answers to a husband but not his wife; phones that are too big for their female users’ hands, causing strain or injury to the wrists and hands. It’s easy for folks in positions of power to overlook discrimination when they’re not the ones impacted. This is why it’s so important that women have leadership positions in businesses, governments, and academia. Quite simply, women are more likely to include other women in their calculations. It’s easy to blame “the algorithm,” when we should really be asking who wrote the algorithm in the first place, and what life experiences informed the writer’s choices.

If I had magical library superpowers, I’d get this book into the hands of every policymaker, venture capitalist, executive, teacher, parent, and spouse that crossed my path. As it is, I’ll hope that this review will serve that purpose. On a final note, keep in mind that this and all books reviewed by a CPL librarian in the Insider fulfill the “recommended by staff” category in our 2022 Ultimate Book Nerd challenge.