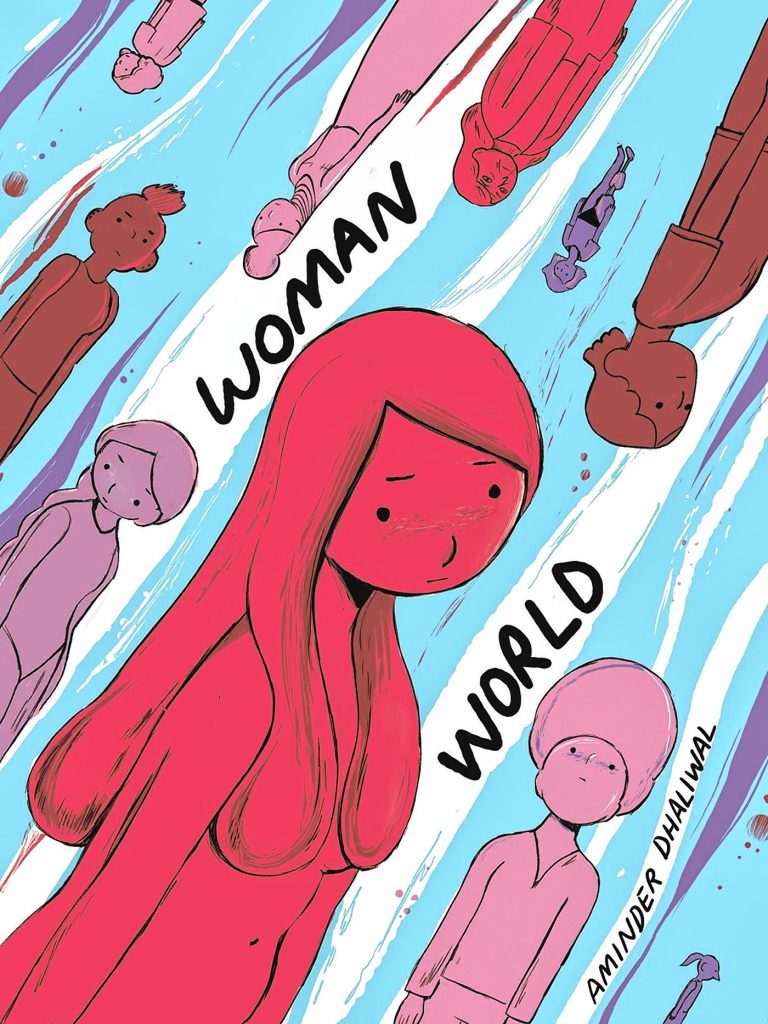 In many ways, Aminder Dhaliwal’s graphic novel Woman World is a story of the dystopia-that-wasn’t. Set in a present or near-future Earth, this is the story of an exclusively female society that finds itself carrying on after a gradual, worldwide disappearance of men. After a predictably rocky transition (e.g. swaths of men being kidnapped, their ejaculate traded on the black market), the world’s women unite, organize, and learn to move forward. Seeing them do so is an absolute pleasure.

At the book’s opening, the author brings us up to speed with a flash-back synopsis of the male die-out that led to the present. Essentially, a genetic mutation caused all new babies to be born female, while all of the existing boys and men eventually died out naturally. Within a few generations, the world has become exclusively female (including, it’s implied, a number of trans women — a detail that I love, even if it raises some logistical questions). Reproduction is possible in a laboratory, so humankind is not in danger of extinction. This is “soft” science fiction at its best, with Dhaliwal focusing entirely on the societal implications of a man-free world, versus how and why such a situation might occur.

Cut to the present. We’re following the members of small community that has united under the banner of Beyoncé’s Thighs. The women of Beyoncé’s Thighs find themselves grappling not with “women’s issues,” but with human ones: unrequited love; the value of friendship and the sting of loneliness; conflict resolution; leadership; the power of nostalgia to both wound and heal. What’s surprising (although maybe it shouldn’t be) is that the women are Basically Alright. Life goes on, albeit with slightly crumbling infrastructure and an uncontested nudist mayor. The characters’ foibles are extremely funny, but also raise some interesting philosophical questions. How does feminism continue to exist in a world where women already have full and equal rights — and was something lost, gained, or both, in that transaction?

This comic was originally released in serialized format on Instagram, so it consists of a series of linked vignettes, rather than a continuous, linear narrative. We see characters with prosthetic limbs and mastectomy scars, living without shame or judgement among their sisters. The world after men is different, but not apocalyptic. Women have no choice but to learn to harness their own, and recognize one another’s, talents: humanity’s survival depends on cooperative work toward a common goal. This book is irreverent, quirky, and laugh-out-loud funny, but it also has a big heart. It’s worth noting, too, that this title counts as a Fiction Graphic Novel for those who are participating in CPL’s Ultimate Book Nerd reading challenge!