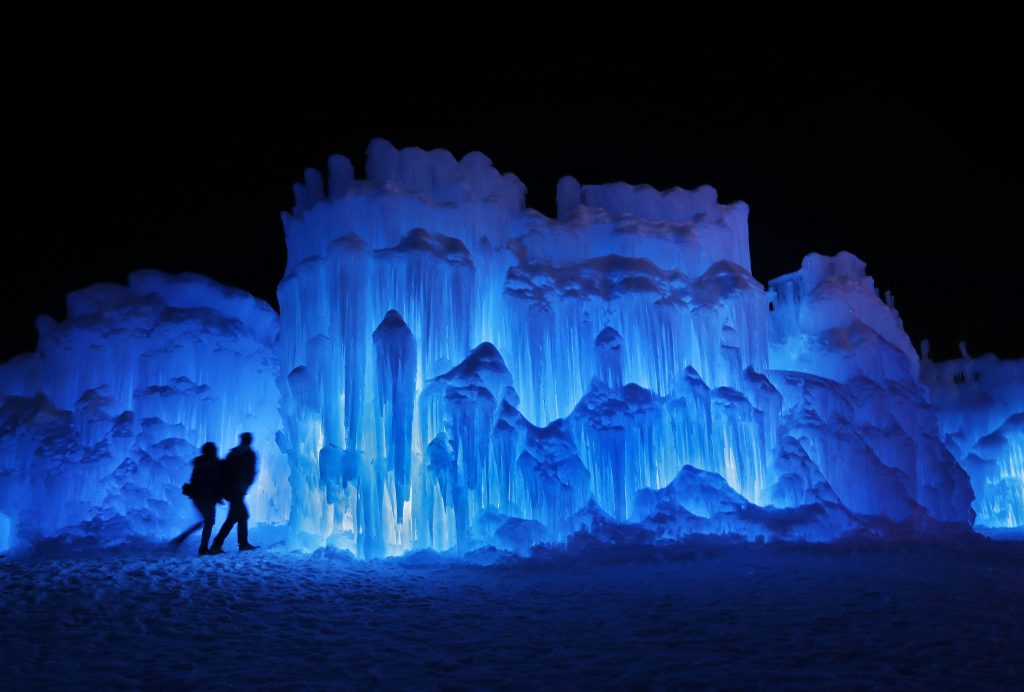 FILE – In this Saturday, Jan. 26, 2019 file photo, a couple heads toward an entrance to a cavern at Ice Castles in North Woodstock, N.H. A neighbor to the seasonal atraction alleges that melt water from the Ice Castles' property flooded her basement with over 15,000 gallons of water in April 2019. (AP Photo/Robert F. Bukaty, File) Robert F. Bukaty 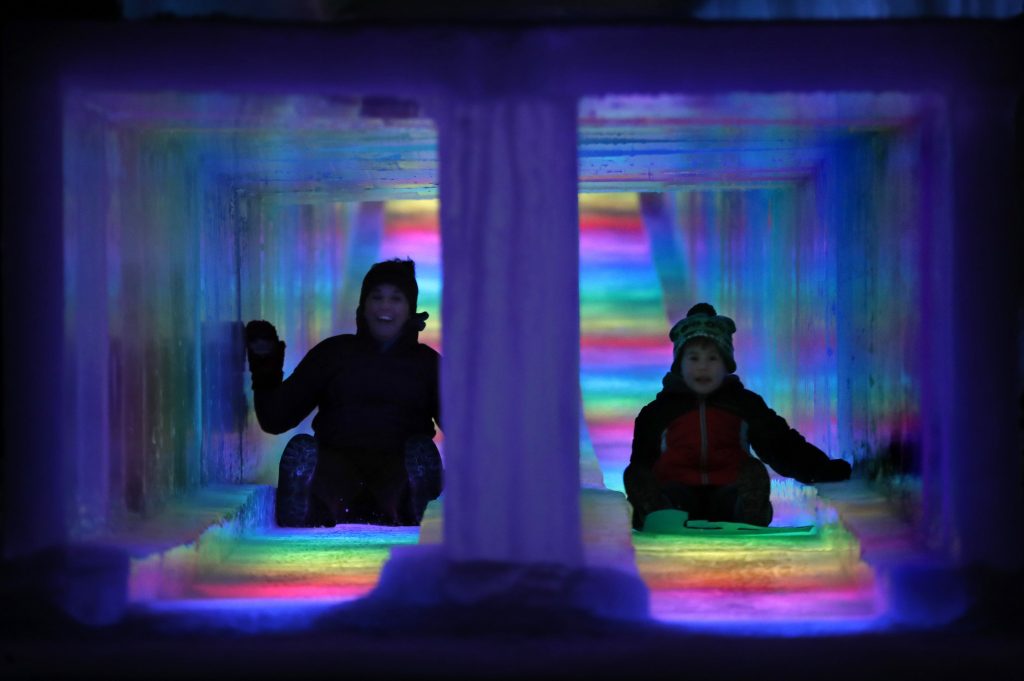 In this Friday, Jan. 25, 2019 photo, visitors race down the side-by-side tunnels of a 97-foot ice slide at Ice Castles in North Woodstock, N.H. The winter wonderland is one of six in North America. (AP Photo/Robert F. Bukaty) Robert F. Bukaty 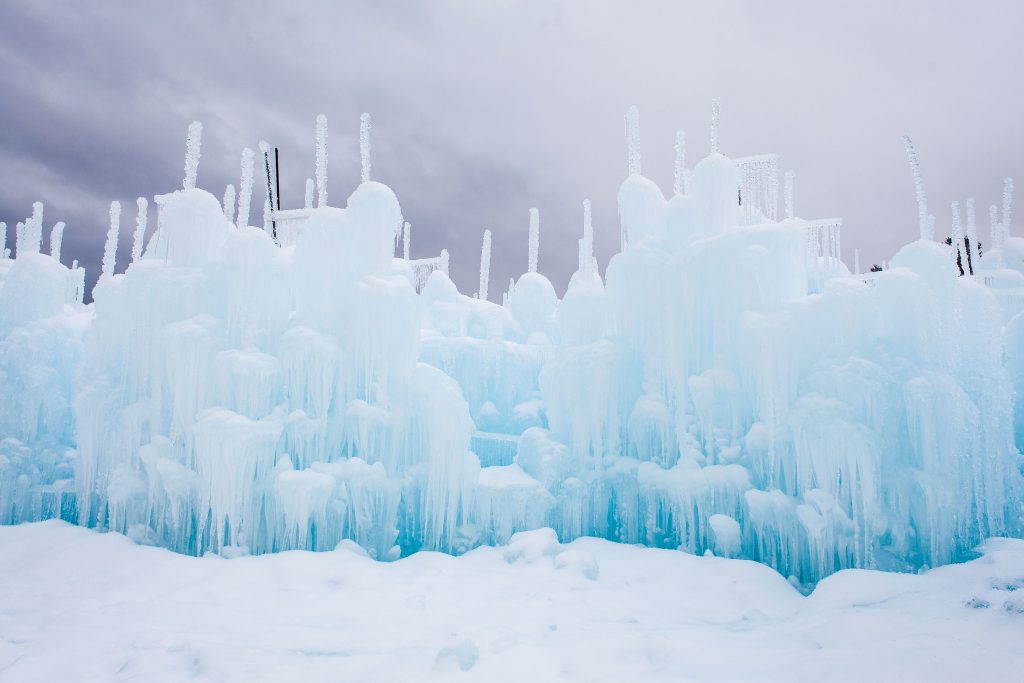 The construction of Ice Castles continues ahead of opening day near the Hobo Railroad in Lincoln on Tuesday, Dec. 19, 2017. (ELIZABETH FRANTZ / Monitor staff) Elizabeth Frantz 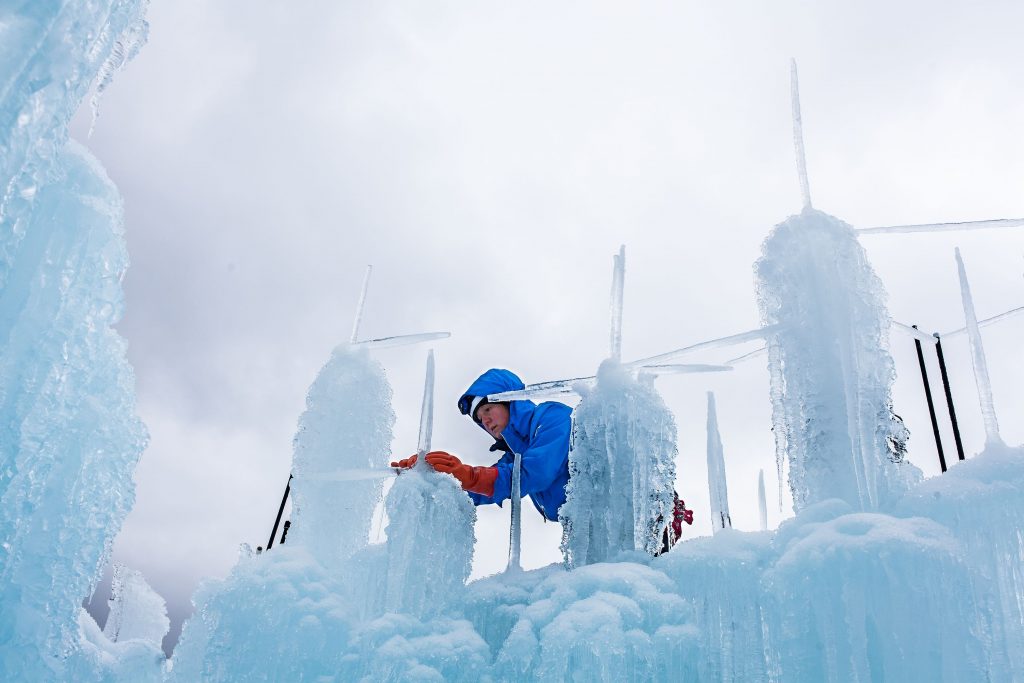 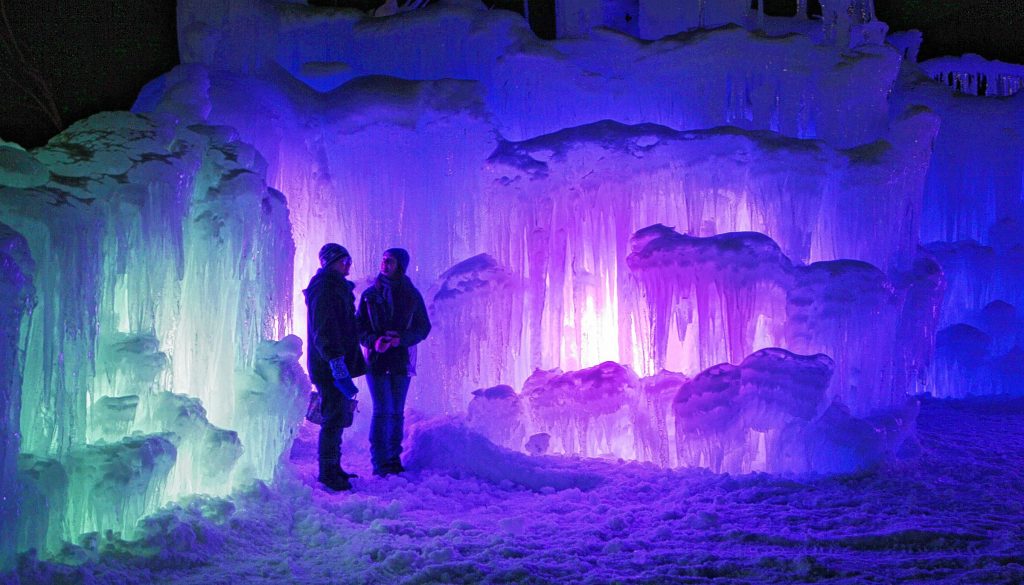 In this Wednesday, Jan. 8, 2014 photo, patrons tour an ice castle at the base of the Loon Mountain ski resort in Lincoln, N.H. The ice castle begins to grow in the fall when the weather gets below freezing and thousands of icicles are made and harvested then placed around sprinkler heads and sprayed with water. The castle will continue to grow as long as the temperatures stay below freezing. (AP Photo/Jim Cole) Jim Cole 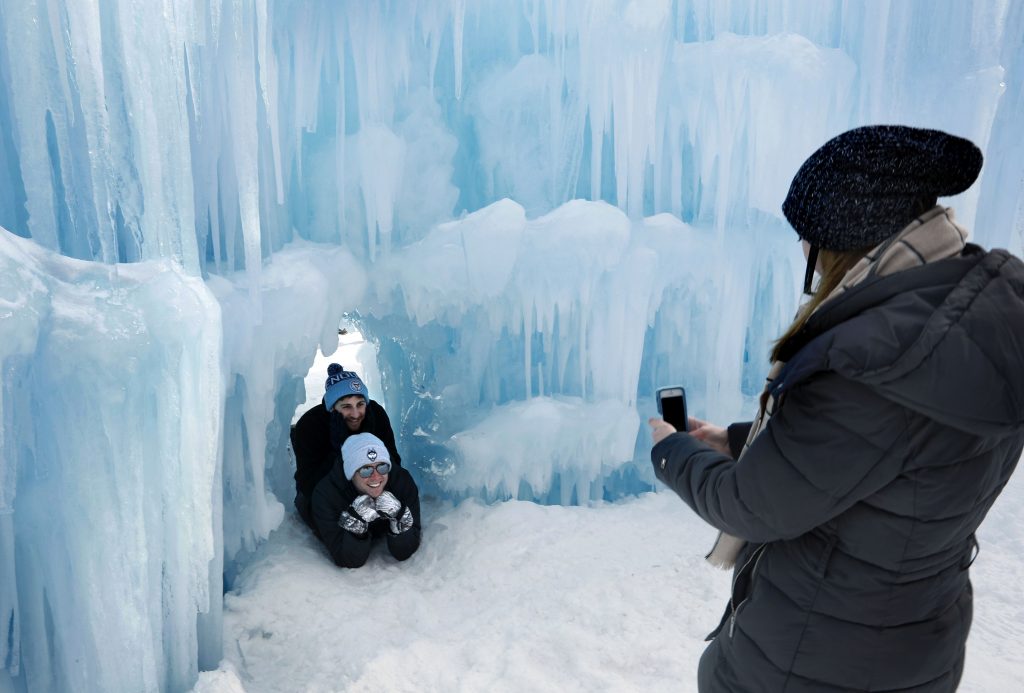 In this Saturday, Jan. 26, 2019 photo, visitors pose for a photo in a tunnel at Ice Castles in North Woodstock, N.H. With a seemingly endless variety of photo-ops, most visitors have a hard time putting their cameras down. (AP Photo/Robert F. Bukaty) Robert F. Bukaty 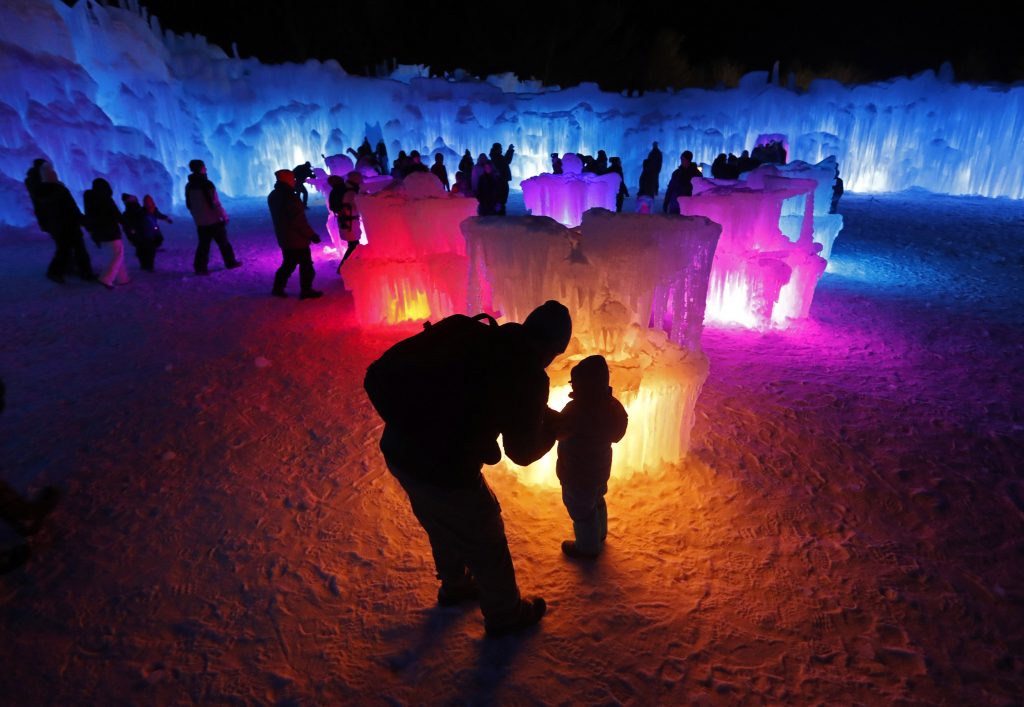 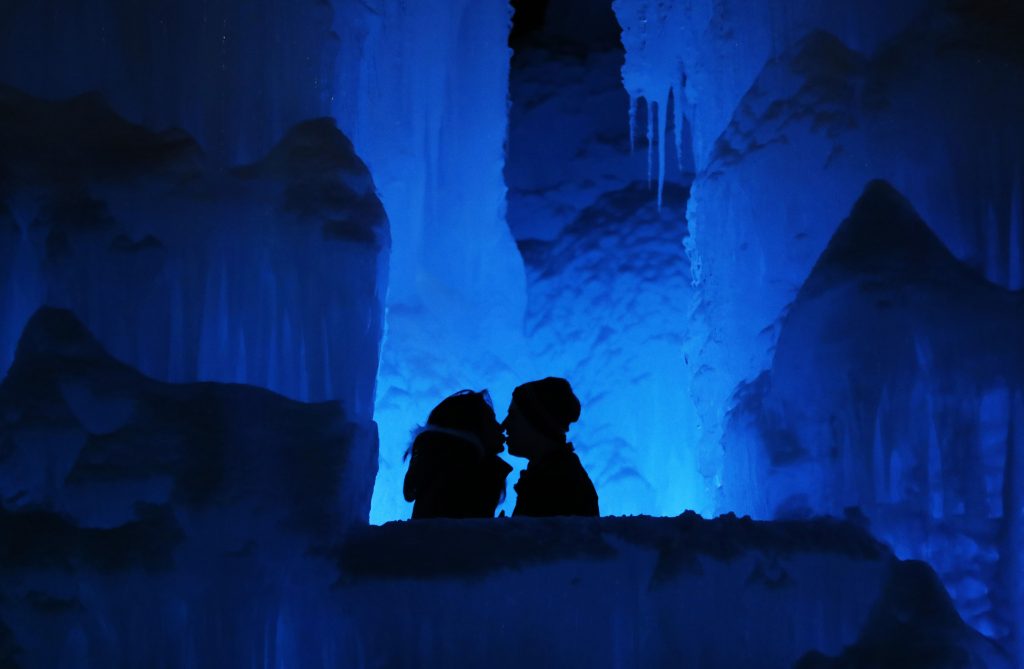 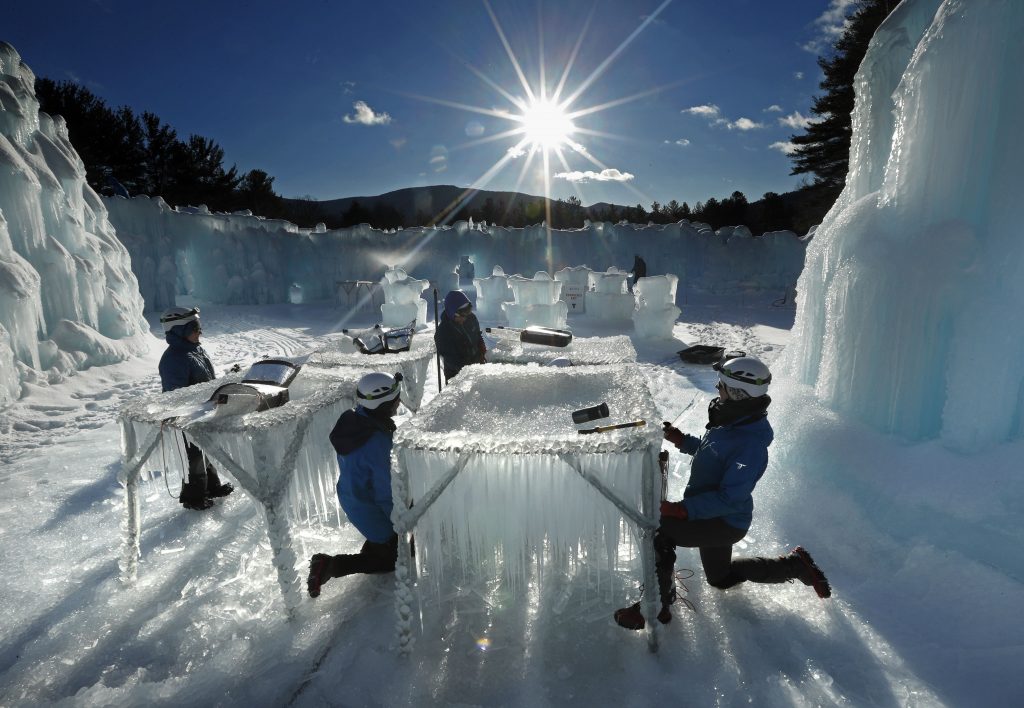 In this Monday, Jan. 28, 2019 photo, icicles are harvested for use in growing the walls at Ice Castles in North Woodstock, N.H. The winter wonderland is one of six in North America. (AP Photo/Robert F. Bukaty) Robert F. Bukaty 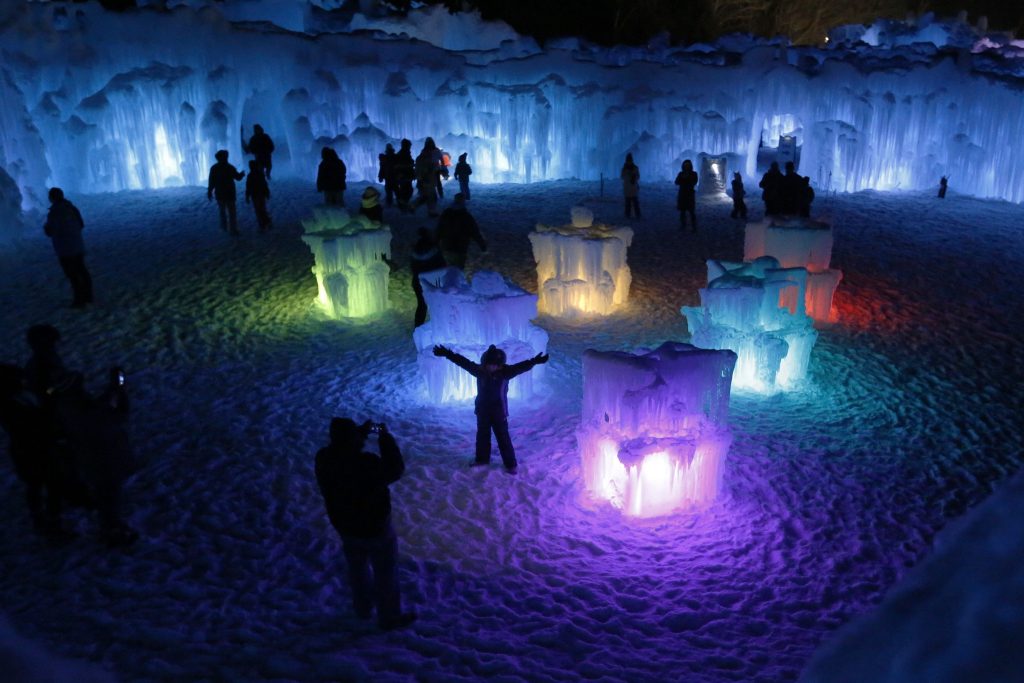 FILE - In this Jan. 25, 2019 file photo, a youngster poses near ice formations in the courtyard at Ice Castles in North Woodstock, N.H. Organizers of annual hand-crafted sculptures said the popular attraction will open as planned on Friday, Jan. 10, 2020, despite the warmer weather expected through the weekend. (AP Photo/Robert F. Bukaty, File) Robert F. Bukaty 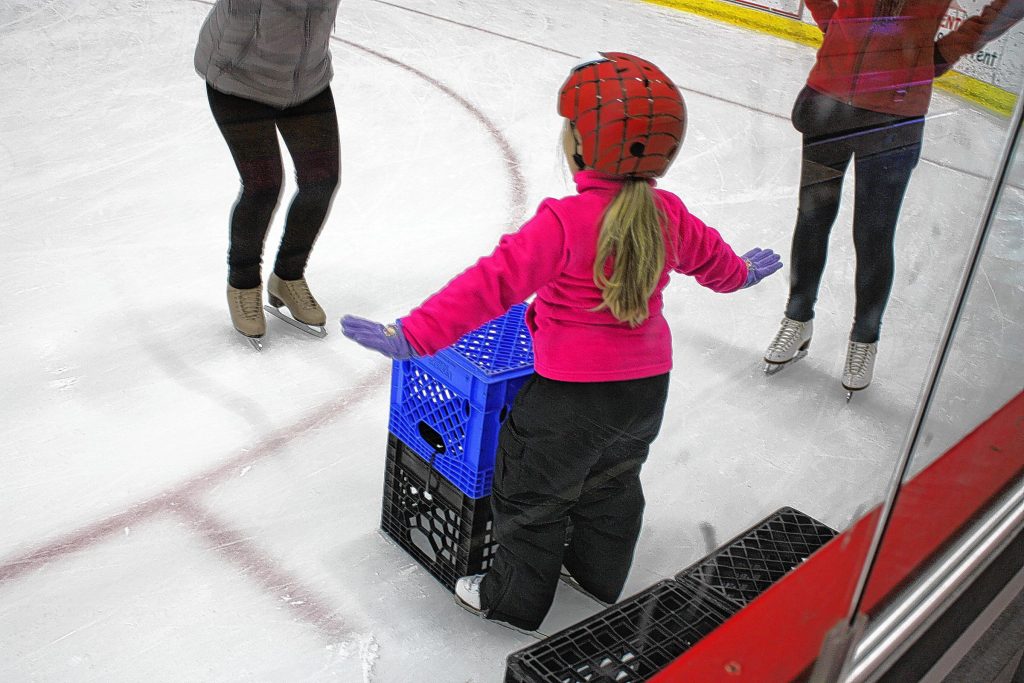 Concord Parks and Recreation offers the Itsy Bitsy Skaters Program for kids ages 3 to 5 on Wednesday afternoons at Everett Arena. This is a chance for little ones to get familiar with moving around on the ice, with guidance from some of Parks and Rec’s finest instructors. This past Wednesday was another slippery good time. Above: Skating instructors Kari Inglis (right) and Cathi McDonnell help Kayda, 4, keep her balance while Alaina, 4½, goes nice and slow behind them. There were a few falls during the lesson, but the girls were eager to get right back up and keep trying. Top right: Alaina gets some help lacing up her skates before taking the ice. This was Alaina’s third lesson, making it the third time she’d ever been on skates. Right, above: Alaina holds out her arms to keep her balance. Right, below: These girls got the hang of it pretty quickly. Bottom right: Corah (right), 1½, is a little young for the skates right now, but that didn’t stop her from coming out to watch her sister, Kayda, give it a shot.

You don’t have to travel to the North Pole to find Frosty’s winter wonderland.

The company that has built a frozen fortress in New Hampshire for the last seven years has returned again in 2021. Ice Castles is an award-winning frozen attraction located in four cities in the U.S., including Woodstock, an hour drive up Interstate-93. It is opening for the season on Jan. 14.

The castle is more than 20 million pounds with some 12,000 icicles grown daily to construct it.

The ice is farmed on metal racks sprayed with water to make icicles. Those icicles are then harvested, placed by ice artists and sprayed by sprinklers. As the water from the sprinklers freezes, the icicles grow larger and larger. It only takes a few weeks to cover the site of the castle, on Clark Farm Road in North Woodstock.

The popular attraction requires advance ticket sales, as capacity is limited, especially this year. Of course, since it’s a giant ice creation, the weather may also close the site.

Tickets can be reserved on the website icecastles.com. Weekday rates are $14.99 for children (up through 11) and ages 12 and up are $19.99. Weekends and holidays, including school vacation weeks, are $19.99 for children and $24.99 for ages 12 and older. Tickets are timed for entry, but once you are in you may stay as long as you like. However, there is no re-entry after you leave.

If anyone in your group isn’t feeling well, do not visit and reschedule your tickets for another time, at least 24 hours in advance is preferred. All sales are final.

COVID precautions at the Ice Castle also include keeping six feet of distance between parties, all staff will be masked, and guests must be masked when interacting with employees or in common areas. High touch surfaces are sanitized routinely and crawl spaces, canyons and tunnels will be one-way traffic.