Finding community in return to region 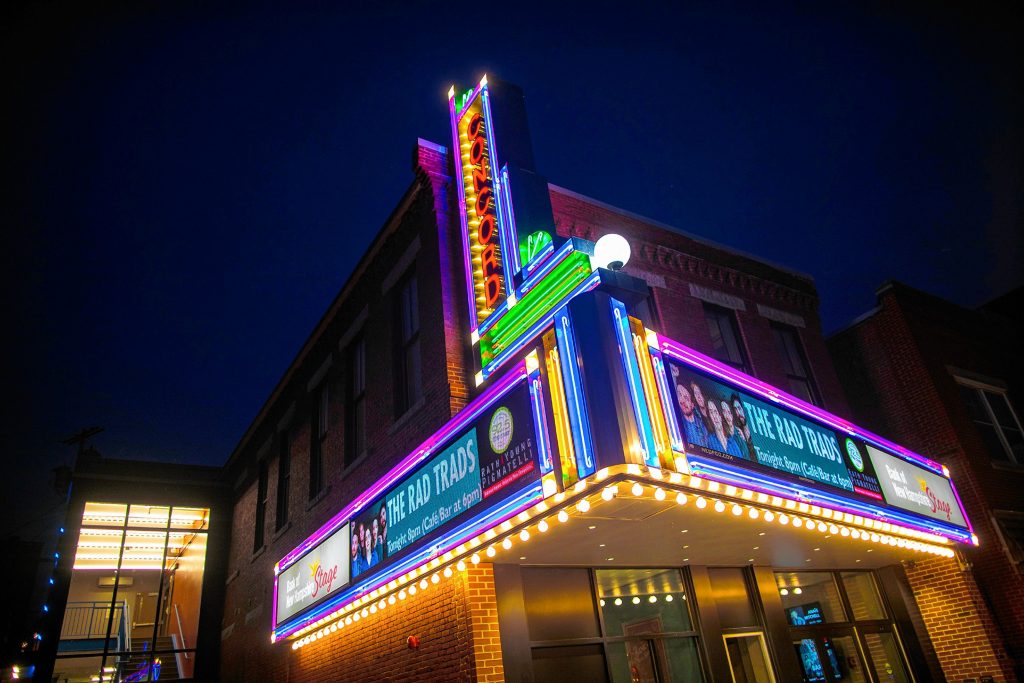 The marquee of the new Bank of New Hampshire Stage in downtown Concord on Saturday night, August 17, 2019. The smaller venue of the Capitol Center for the Arts has opened with musical groups and stage presentations in an intimate setting.

We were sitting on stools, bobbing to the string strokes and lyrics at “Celtic Night,” a monthly performance that celebrates English and Celtic tradition through live music, hosted by award-winning fiddlers Jordan Tirrell-Wysocki and Liz Faiella. The rows of chairs in front of us were nearly full and we found out (by a raise of hands) that most of the attendees were not here for their first time. I was taken aback by this growing group of Celtic music aficionados and the beautiful space that opened only last year. Indeed, The Bank of N.H. Stage was a long-vacant Concord Theatre up until July of 2018 when the Capitol Center for the Arts took it over.

I’ve been reflecting, as of late, on what it means to come back to a space I once knew. It’s one thing to travel to a new place, as we did across Western America and Europe this past year. It’s another to weave yourself back into the folds of your past community.

Up until I was two, my family lived in Allenstown. We had a beautiful house that suffered from a very interesting neighbor situation: a man who raised pigeons. The pigeons, of course, didn’t know the property boundaries, so they frequently exercised their freedom to fly and make a mess. So my parents moved us 20 minutes away to Bow. I’ve moved every year since high school, so Bow is the place that most aligns with the word “home.” Not only does the area encapsulate my most joyous and heartbreaking memories, it is also the birthplace of my most sustained relationships. Friends I met in elementary school are friends I text on a weekly (and even every-other-day) basis. One of my closest friends today is the same one that I tried to escape daycare with at the age of five. Therefore, I feel such gratefulness for this place.

That said, ever since leaving for college in 2011, I haven’t been home in Bow for anything more than a few weeks. I came home on breaks, saw friends, hosted family parties, and maybe maybe ventured to downtown Concord for a special dinner out or to show relatives around. I have done very little in the way of experiencing or contributing to the greater community here – my role has been more akin to a seasonal tourist than an active resident.

James and I arrived home from our travels around Europe at the end of August and decided to stay through fall and the holidays. I was excited about the prospect of more family (and pet!) time, less moving around and more alignment with my health, and finding out what the heck had become of my hometown area.

These days, Concord looks a little different than it did when I was growing up. Though most of the buildings in Concord went up in the second half of the 19th century (right after the railroad came to town), it’s recently seen a renaissance. In 2014, the City Council approved a $10 million revamp of the historic downtown. As a result, Main Street boasts wider sidewalks, new lighting, public art, and gathering places. This once sleepy town now has a bustling shopping scene, long wait times for dinner on the weekend, a multitude of fitness options, and there’s always an event to catch – from concerts and political rallies to art showcases!

Since moving back to the area, I’ve taken a different approach to my community involvement and I have tried to be more of a contributing local. For one, I started teaching yoga at EVO Rock + Fitness, just a seven minute drive from my house. I remember getting my skis in high school from the S&W across the street, but EVO opened its doors in 2012, the year after I left for college. I also started taking barre classes at Pointe Barre Studio right on Hills Avenue in Concord. This premiere studio looks like a place out of the South End of Boston or New York City, and it shares a space with a beautiful spin studio called Strive. I had the pleasure of training with the owner of the barre studio, Katie Behner, for a few weeks last fall and started as Pointe Barre’s first yoga teacher in December!

Aside from my newfound relationship with the greater Concord area, I’ve gotten more involved with the Bow community. Recently I attended a meeting for the “Bow Democrats” in the basement of the Bow Library. I remember when the basement of the library wasn’t even finished! Regardless of party, there is something special about gathering with your local community to discuss contemporary issues. Not to mention my cousin, Maura Sullivan, was our guest speaker! I also joined a Bow residents Facebook group, which people use as a platform to ask questions or make announcements. Never did I ever expect that the community would use such a platform to connect with one another, and I think it’s totally awesome.

My high school self would not have guessed that an ideal Saturday would be to take a barre class, visit my favorite coffee shop, Revelstoke, shop for goods at the indoor winter farmers market, and hike in the Bow forest (thanks Bow Open Spaces!)

Not only have I become a regular in Downtown Concord, I recognize the other regulars – from the guy with the two off-leash yellow labs, to the saxophone player that usually assumes his position near the corner of School St. and N. Main St. I can barely recognize this version of Concord. Sure there are still notes of history and some of the same shops, but there’s a new buzz through the street, lines out the door for coffee, and dozens of vibrant sub-communities to connect with.

I love to travel, to go somewhere unknown, to be unknown, to feel lost, and to discover new things about myself through new experiences. I also value community and the people that work so hard to make it so. It’s been such a gift to rediscover the area I grew up in and to contribute my own gifts to it. I’m grateful for this time to continue weaving myself into the fabric of this special place … before the next adventure!