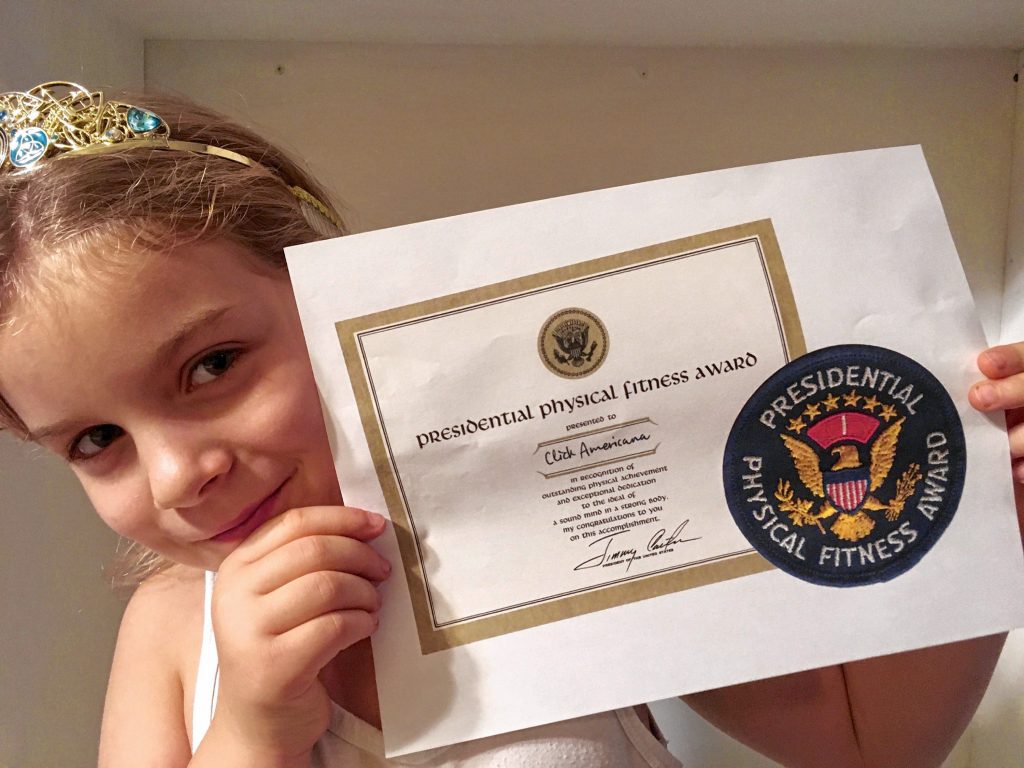 Mike Morris will never forget when Paul, the 10-year-old, busted out 18 pull-ups in elementary school. Morris still can't reach that mark, but at least his daughter has won a Presidential Physical Fitness Award. Courtesy of Mike Morris

His name was Paul.

The last time I saw him, we were both in the gym, staring up at the pull-up bar. Paul leapt up and grabbed hold, hung for a few seconds and proceeded to bust out 18 pull-ups. He was huffing and puffing. He was fast and furious. He was amazing.

I was stunned. I’d never seen anyone do that many pull-ups before. It was my turn. I jumped up, missed the grip and slipped off. I got up on the second attempt and hung there, staring at the yellow cinder block wall in front of me. I took a deep breath and pulled as hard as I could. One pull-up. I tried a second, but could barely get my forehead to the bar. I was huffing and puffing. I was neither fast nor furious. I was definitely not amazing. One pull-up. That was it.

It was 1973. Paul and I, and the rest of my gym class at Laurel Ridge Elementary School in Fairfax, Va., were rolling through the Presidential Physical Fitness Awards testing. There were seven exercises, including pull-ups for boys and flexed arm hang for girls. Honestly, all I remember is my sheer lack of pull-up awesomeness. I couldn’t tell you Paul’s last name. I don’t remember what he looked like. I just remember those 18 pull-ups. And my one pull-up.

I got over the humiliation of the day pretty fast. “Physical fitness” wasn’t anything I particularly cared about. We played sports, we ran around in the woods, we climbed trees. Paul lived in the same development that I did, but we never hung around together. My family moved to New Hampshire the next year, and for all I know, Paul’s record of 18 pull-ups by a 10-year-old still stands.

For the next 30 years or so, I didn’t really think about pull-ups. I’d occasionally see a bar at a park, and relive my single pull-up glory days. I was a little stronger, but could still only get the number to five or six. Then one December day, while walking down one of those “fitness trails” with my wife and dogs, we strolled past a pull-up bar. I jumped up and grabbed on. I started to pull, and the pain shot through my right shoulder. Zero pull-ups.

I’d always been fairly active as I got older, but here I was: fit, 40 and in pain.

I walked into a yoga class. It was hot and challenging. I huffed and puffed. I was fast and furious. I wouldn’t say it was amazing, but I kept going, almost every day. In about two months I was pain free. I became obsessed with yoga, health and fitness. One Christmas, my wife gave me a pull-up bar. It was the kind that wedges in a door frame. I started in on the pull-ups. I got stuck at seven. I was stuck at seven for a long time.

I kept going to yoga, almost every day. My joints felt better. I had more energy. I could breathe deeply again. I’d occasionally try a few pull-ups. Seven.

I wondered why I could heal the pain in my body, but not pass the seven pull-up mark. The answer turned out to be pretty simple: Practice. Any goal or dream requires turning thought into action. I practiced yoga every day. I tried pull-ups every couple of weeks. I started practicing both, every day. My arms complained a little. I’d follow work at the pull-up bar with yoga on the mat. I persisted. Seven pull-ups, 10 pull-ups, 12 pull-ups.

I start every day with a hang from that pull-up bar. Some days I just hang there. Some days I bust out as many pull-ups as I can. Some days I wonder if Paul knew then what I know now: If you think it, you can achieve it, but you must take action.