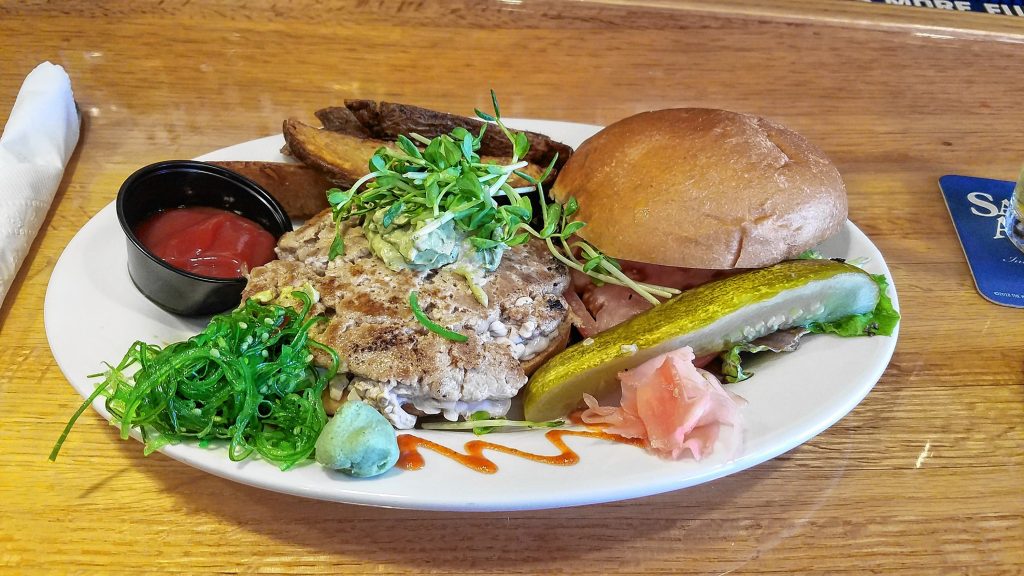 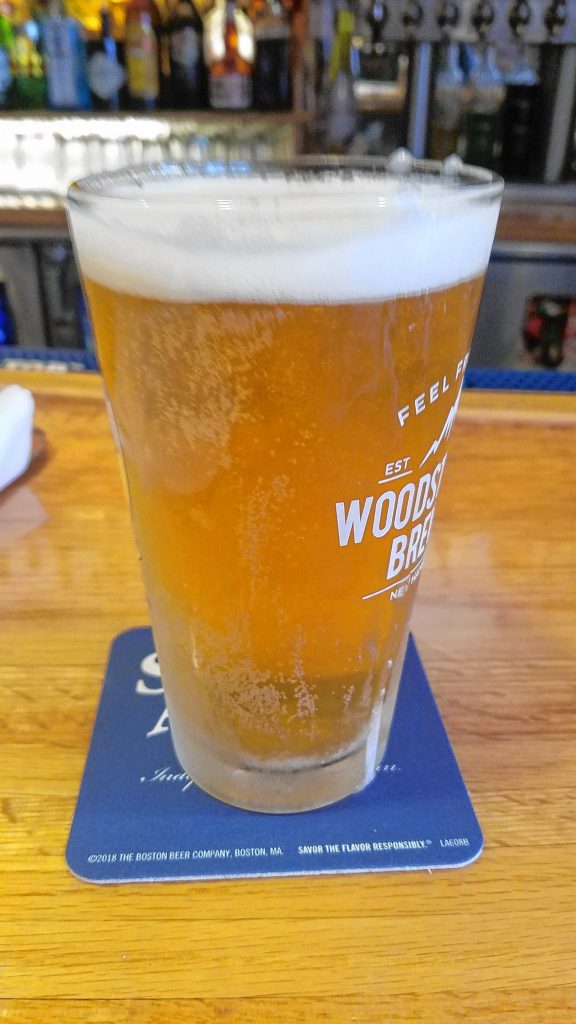 Over the course of our field trip, we had some hot wings at Kettlehead and some pulled pork potato skins at Tilt’n Diner, both of which were excellent. While they were good, neither dish was meant to be a full meal, so we knew we had to find a place to have an honest, sit-down lunch experience.

We ended up in the quaint downtown center, where we found Onions Pub and Restaurant, which occupies the lower level of the Tilton Inn. The sign out front says the inn was established in 1875, though the restaurant is newer.

The menu featured many enticing options – Bermuda Fish Sandwich, Reuben, Teriyaki Glazed Steak Tips, Pan Seared Scallops – it seemed like it was going to be hard to choose. Then the waitress mentioned that one of the specials was a flat-top grilled tuna burger served with potato wedges. It sounded interesting, so we ordered one.

After a minute or so, the waitress and the chef came back to ask how we would like it cooked – the chef said it was sushi-grade ground tuna and that usually people like it on the rare side. We ordered it medium, just to be safe (in all honesty, though, when it comes to any kind of ground meat, it’s always better to err on the side of cooked rather than raw – any portion of ground meat likely contains tissue from dozens of animals that all went into one grinder, meaning there’s a better chance for contamination in ground meat than there is with solid pieces).

Anyway, after not too long of a wait, the meal was served, and the presentation game at Onions was definitely on point. The burger was served open-faced, with some arugula and avocado on top. Surrounding it were all the fixings you get with sushi – wasabi, pickled ginger and some seaweed. The burger also came with thick, hand-cut potato wedges and a pickle spear.

On first bite, this tasted just like a spicy tuna roll in burger form. True, we did request the tuna cooked as opposed to raw, but we could certainly see what they were going for here. After a couple bites, we added most of the wasabi to get the full effect, and it was a great idea.

Having never tried a burger made with ground tuna before, we didn’t know what to expect, but the folks at Onions definitely know what they’re doing. This burger was a brand-new idea for them, and our guess is that it will become a regular item soon enough – at least two other patrons ordered the same thing while we were there.

The wedges were also everything we expected them to be – thick, hearty, well-seasoned. They even had a tiny bit of sweetness to them, which was surprising and pleasant.

To wash it all down, we ordered a pint of Tie Dyed, a dry-hopped pale ale from Great North Aleworks. This was a dry, crisp and light ale that would be good to sip on a porch in 75-degree weather. It also went well with our mild-flavored tuna burger. Not quite an IPA, the Tie Dyed is more of a hoppy light ale for all occasions.