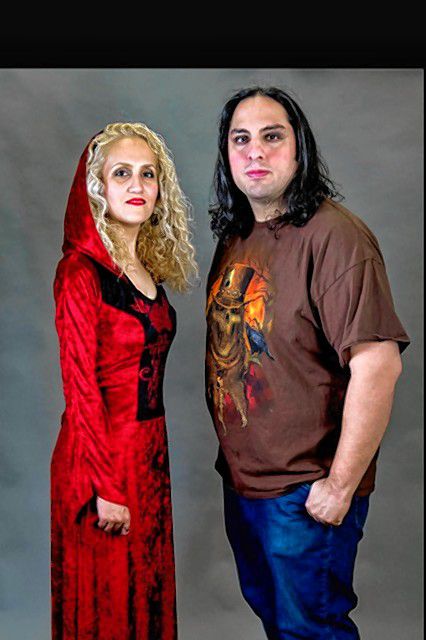 Delusive Relics, a new electronic music project in the style of Depeche Mode and Nine Inch Nails, will perform music from its debut album at Hatbox Theatre on Friday.

Delusive Relics is the side project of Farhood Ghadiri, member of the Iranian progressive rock band Mavara, and his wife, Anis Oveisi. Ghadiri, who performs under the pseudonym Frank Nik and grew up with music from Depeche Mode, Gary Newman and other ’80s and early ’90s electronic, industrial and synth pop bands, dreamed since childhood of being part of an electronic music project. Ghadiri said he put Delusive Relics together because he felt the time was right to step away from rock and to finally take on his dream project.

The show will feature Ghadiri and Oveisi on keyboards, with Vanessa Hale on vocals. The show includes customs and visual effects. Ghadiri said that while the audience will recognize the overall sound, they will also experience a different approach to electronic music, inspired by his upbringing in Iran.

“It’s caused me to compose songs that are very different from songs composed by people from here,” said Ghadiri.

Iranian politics and heritage influenced the music on Delusive Relics’ debut album Chaotic Notions. Ghadiri said he wrote the song “A Woman’s Diary” after hearing the story of an Iranian woman’s arrest for removing her hijab in public in protest of gender inequality. To further connect the song to their home country, the duo commissioned an Iranian director to film a video for the song in Iran. The video for “A Woman’s Diary” has been well-received in the United States; it has been shown on MTV and VH1 and viewed more than 10,000 times on YouTube.

The independent music website Come Here Floyd gave “A Woman’s Diary” a rave review, saying that, “Delusive Relics’ music is not only a blend of multiple genres, but it is a fascinating description of how our human emotions are such, as well.”

The album is receiving high praise as well. The electronic music website Stereo Stickman said, “Delusive Relics offers a multitude of musical journeys and ideas throughout the aptly titled album Chaotic Notions. Bursting onto the scene with the electronic urgency of ‘Command Machine,’ the project carefully walks the line between intensity and delicacy, offering equal parts whispers and weight, and always holding close to an artistic and unexpectedly soulful core.”

Senie Hunt will open as a special guest. Hunt is a self-taught singer-songwriter and percussive guitarist based in Concord. Adopted from Sierra Leone at age 5 during the Diamond Wars, Hunt brought with him an inherent passion for West African rhythms and percussion. His playing is eclectic, powerful and artfully unique. Hunt composes continuously and has a large body of work for a young man. He performs throughout New England and is about to release his first studio album, Song Bird, in May 2019.

Ghadiri and Oveisi will perform Friday, March 22 at 7:30 p.m. at Hatbox Theatre in Concord. Tickets are available at hatboxnh.com and at the door. The evening will be the first time the duo performs music from the album Chaotic Notions.

For more info on Delusive Relics and to view their video for “A Woman’s Diary,” go to delusiverelics.com.