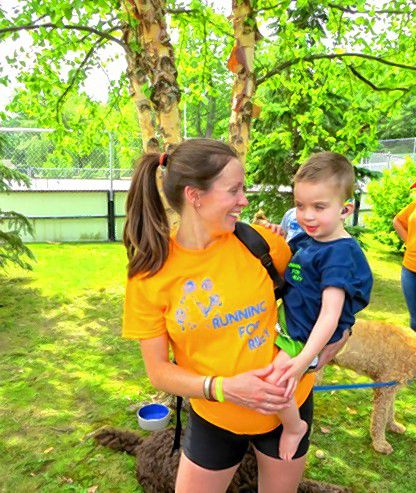 Riley Duquette was born in May 2012 with a rare disease that falls under the umbrella of Peroxisomal Biogenesis Disorders. PBD refers to disorders in the Zellweger Spectrum – rare, genetic, metabolic, terminal conditions affecting all major systems of the body.

His family – mother Karly Duquette and stepfather Shawn Moseley – put together the Running for Riley Fun Run/Walk last year as a way to raise money and awareness for families affected by rare diseases and to celebrate the health of those fortunate enough to participate, and the second annual event is set for Saturday. It’s also a way to bring the community together and enjoy a nice day outside, all while contributing to a worthy cause.

Riley grew up playing at White Park, ringing the chimes and riding the swings, so it seemed like a natural fit for an event like this.

“We wanted to start something while he’s alive that we could continue on,” Moseley said. “Riley’s 6th birthday is May 28, and we wanted to pick a date close to that. The whole thing falls under Riley’s name, and I think it gives it a nice meaning to have it around that time.”

The youth and walking divisions will do a 1-mile loop around White Park, while the rest will do 2 miles. The course wraps all around the park, with a short section on the sidewalk, but it’s all contained within the park. While the event is mostly just for fun, there will be medals given out to the top three runners in each division, and times will be recorded.

Online registration is open at gorileygo.com, and fees are $16 per person for youth, middle school and high school and $18 for adults and the walking division. Sponsorship opportunities are available as well, and donations are welcome. Day-of registration will also be available right up until the first race.

The first division will begin at 10 a.m., and the whole event will run until about 2 p.m.

And spread the word.

“We’d love to see it grow into something bigger and more,” Moseley said.

For more information, contact Moseley, the race director, at smoseley@sau8.org.