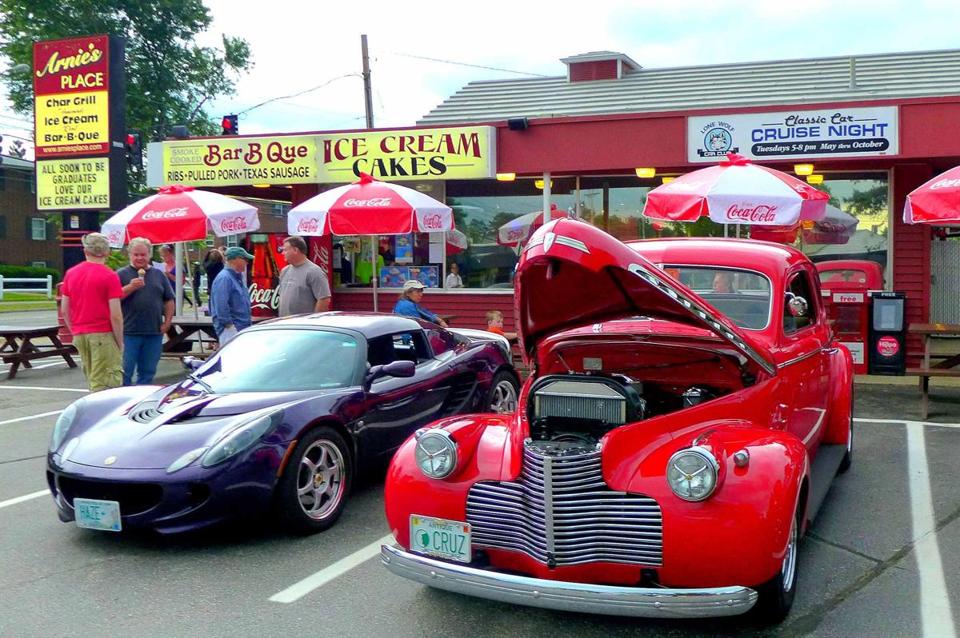 Arnie’s Place officially started in the summer of 1992 when still current owner, Tom Arnold, took the reins from the Dairy Queen. However, the Arnie’s story started much earlier because Tom started early in the restaurant business.
Tom’s father worked at the original Friendly’s Ice Cream Shop located in Pine Point, Massachusetts. He was a manager for a Friendly’s Ice Cream Shop in Worcester, Massachusetts and then bought the Weeks in Concord in 1964. Tom worked for his father at the original Weeks ice cream shop that was located in the Capitol Shopping Center where Sal’s Pizza now resides.
Arnie’s was first built in 1960 as a Dairy Queen until 1990. Once Tom took the reins in 1992, Arnie’s was quickly recognized as a staple in the community. Tom opened Arnie’s with his homemade ice cream recipes (some over 70 years old) and still runs Arnie’s today with community driven focus. Tom also credits the longevity and success of the restaurant to the spirit of 3 mentors (“Sky Dog” Prescott, Terry Fagen and Randy Jones) who provided support and encouragement during the restaurant’s early days.
Arnie’s Place may close their doors every October but that’s not the end of Arnie’s for the year! Arnie’s is widely recognized for their Christmas Trees. Tom makes sure everyone in the Greater Concord Area has access to the perfect Christmas Tress for their families and homes.
Arnie’s has the largest selection of award winning homemade ice cream! We also strive to make our mouthwatering Bar-B-Que, even more mouth watering everyday in our in-house smoker! Join us for a Tuesday evening Cruise Night and find out why we are the local fun spot!