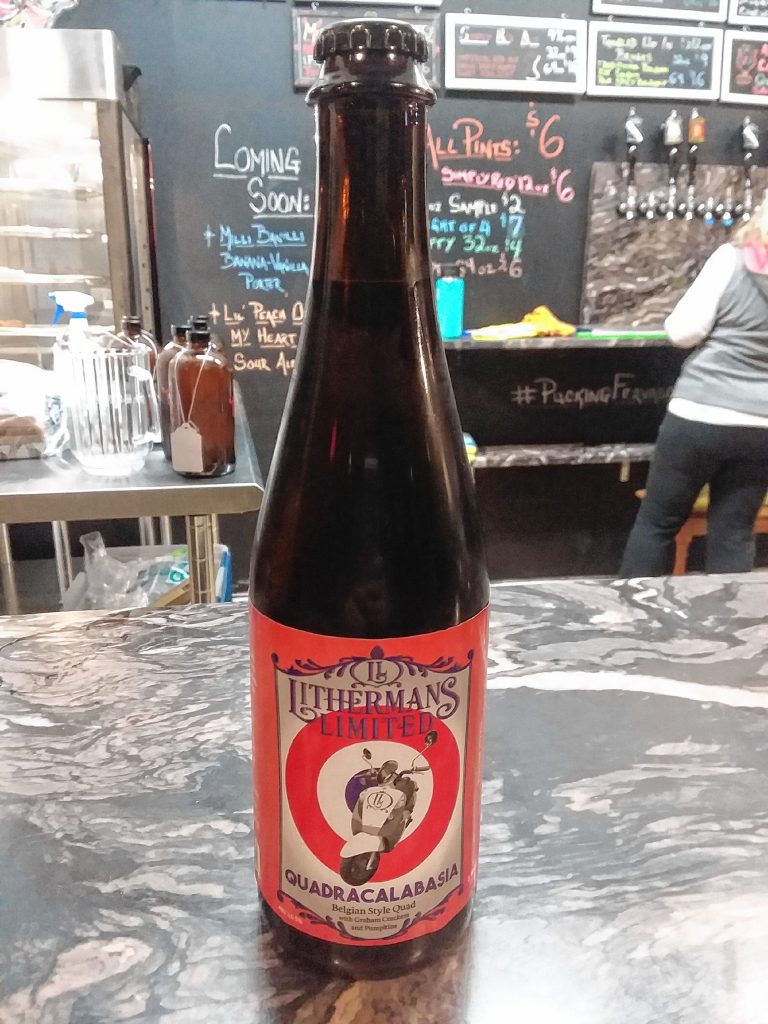 We tested out the Quadracalabasia, a 10.5 percent Belgian quad brewed with local pumpkins and graham crackers, currently on tap – and made by – Lithermans Limited. TIM GOODWIN / Insider staff

But sometimes for the good of a story, you have to do things that aren’t exactly in your tastebuds’ wheelhouse.

We had originally set out to taste test – for all of you, of course – Lithermans Limited’s SoundTrack, the official beer of the SNOB Film Festival last week. Since it was an IPA and in the news because of the festival, we thought it would be a great opportunity to match something timely and beer.

Unfortunately, the official launch was after last week’s paper came out, which had all the info you needed to know to attend SNOB, so we had our fingers crossed that there would be enough supply around the city that we could write about it here, and you could go try it there.

But word on the street was that it was going fast and wouldn’t be on tap around town much longer, And how rude would it be for us to write a glowing review (because all of Lithermans Beers are good) about a one-time brew that you couldn’t even try?

Luckily though, Lithermans just put out its second annual batch of Quadracalabasia, a 10.5 percent Belgian quad that was brewed with pumpkins grown at Apple Hill Farm and graham crackers.

It’s not exactly the beer I typically go out for, but it was worth a shot.

They just put it on tap at the brewery last Thursday, so I stopped by on Friday to grab a glass to end the week on the right note.

Since it is quite strong, you get the Quad in a smaller 12 ounce pour and each customer is only allowed one. It’s also available in 500ml bottles.

In all, Lithermans used 100 pounds of pumpkins, that had been cooked off by the students in the Lakes Region Community College culinary program, and 30 pounds of graham crackers. There is no added spice to it, and that’s a good thing.

For someone who isn’t into the pumpkin beer thing, this is a brew I would have again and again.

The pumpkin flavor is there, but subtle and a nice balance to the aggressive alcohol content that is a Belgian quad.

It’s definitely a beer you want to sip on, so set aside some time to slowly enjoy this creation.

And to be perfectly honest, this is what fall beer should be like.

You should know that this is a popular beer, especially since they debuted it last year and it only comes around once a year, so don’t wait too long to grab a glass.

They have it on tap at the brewery and have set aside some bottles for the day before Thanksgiving, for those looking to bring one to their holiday get together.