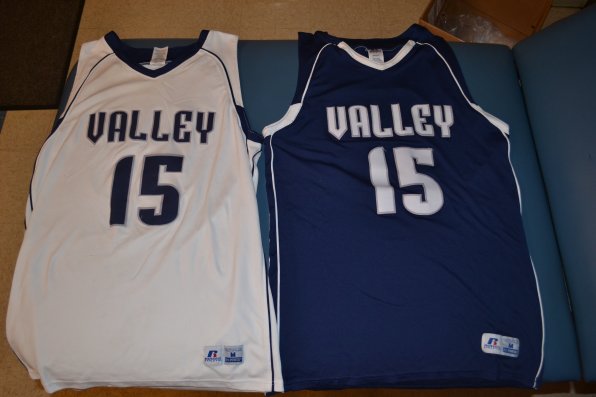 The old unis being passed down the junior varsity teams. 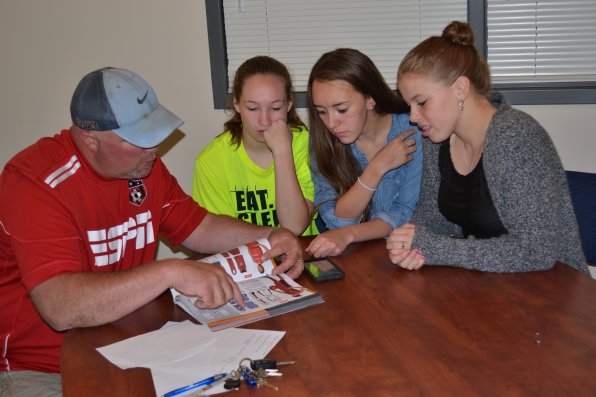 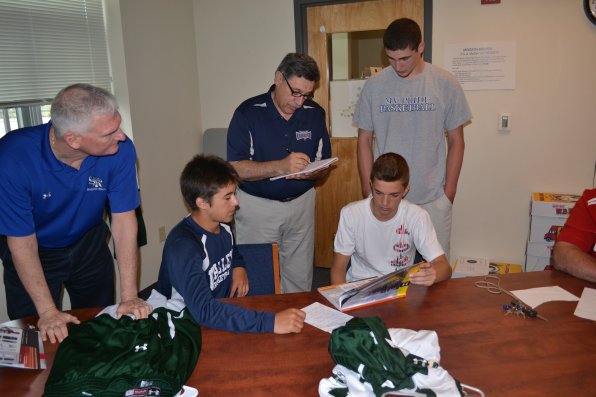 It’s not easy choosing what jerseys will look good for the next few years, but somehow players James Shattuck, Jake Hebert and Ian Curtin did, with the help of athletic director Kevin O’Brien and Brine Sporting Goods rep Bob Palisi. We thought camo was a solid choice, but got outvoted.

As you all can appreciate, it’s important to look good.

Fashion is a big thing nowadays, but it can be downright exhausting trying to pick out the perfect outfit. And we’re just talking about for ourselves when we hit the town, which is nowhere close to the kind of pressure members of the Merrimack Valley basketball teams recently had to deal with. How do you decide not only what you’re going to wear on the court next season, but what your teammates, as well as up-and-coming players will wear for the foreseeable future? You can’t look like a bunch of slobs out there.

Don’t get us wrong, it’s a challenge boys players Ian Curtin, James Shattuck and Jake Hebert, along with their female counterparts, Sammi Osborne, Megan Johnston and Abby Grandmaison, welcomed. Because after all, it meant they were getting brand spankin’ new uniforms for the first time in quite a while.

After a generous donation by the Frank Monahan Foundation, the Pride will be decked out in Under Armour home and away jerseys and shorts, along with travel suits and – if there’s enough money in the donation budget – shooting shirts as well.

“We were pretty surprised,” Osborne said. “I saw it in the paper, but I had no idea we were part of the round of schools.”

“We were very, very excited and it was a great surprise,” said athletic director Kevin O’Brien. “We really appreciate all the work the Frank Monahan Foundation, Under Armour and Brine Sports are doing for us.”

And let’s just say, the teams were in need of new attire to wear on the court. If not for the donation from the foundation, created in memory of the former Bishop Brady basketball coach, the varsity teams would be wearing uniforms this upcoming season that were bought seven years ago.

“I didn’t realize how long it had been,” O’Brien said. “The timing couldn’t have been better for us.”

To put it into perspective, the soon-to-be seniors would have been in sixth grade when those uniforms were purchased. Talk about the need for some extra strength laundry detergent.

“My uniform had a coffee stain on it for the last two years,” Osborne said.

This is the second donation of its kind by the foundation, which did the same for Bishop Brady last season. Now when the two teams play, it might be the best dressed match-up in the state.

“One of the main reasons we chose MV was Kevin O’Brien,” said Monahan Foundation president Marshall Crane. “He’s given so much to the community for so many years and really transformed the athletic program.”

The fun part for the players is that they got to play a big part in choosing what the new unis would look like.

“When we got the books, we spent a good couple hours figuring it all out,” Curtin said. “There’s so many options to choose from.”

With guidance from Bob Palisi of Brine Sporting Goods, O’Brien and girls coach Dave Huckins, the six players not only got to miss class time last week, which is awesome all by itself, but got to sit down and make the final decisions.

“I just wanted them to pick a color scheme that would give us the greatest chance for the ball to go in the hoop,” O’Brien said.

There were lots of decisions to make. What uniform style would look the best? Which shade of blue would best represent the school? What numbers to use and the corresponding size? And what would the front of the jerseys say?

Both squads went with the Armourfuse style along with white for home and navy blue on the road. The home jerseys will have navy around the neck, along with navy and gray down the side. They will read “Pride” across the chest in navy lettering, with some white and gray accents, although the final design won’t be done for a few weeks.

“We want the kids to be a part of the process,” Crane said. “It’s a unique experience.”

For when they stroll into opposing gymnasiums, the navy jerseys will read “Valley” (because you’d need a magnifying glass if the school’s full name appeared), with a gray neck and gray and white under the arms. The shorts will match the same pattern.

“We’ve always had white and navy blue so we couldn’t change it,” Curtin said.

Some of the original numbers chosen had to be changed since they’re not allowed by the NHIAA, and one important one to any basketball team was added – No. 33.

“It’s sacrilegious not to have a (Larry) Bird,” O’Brien said.

The sizes were switched around because, you know, they have to prepare for players who may be playing on the middle school team this year. In order to figure out what sizes to start with, the players reluctantly tried on the Bishop Brady unis donated this season, but only for a short time. They are rivals, after all.

“It will probably be the only time you put on a Brady uniform,” Palisi joked.

“If this is what we have to do to get uniforms, we’ll do it,” O’Brien said.

The travel suits will be navy with a little bit of white and the words “Valley Basketball.” The new school logo will appear on the back neck area.

“It’s not only to look good, but school budgets are so tight, especially in athletic departments,” Crane said. “We looked at it from what school just got new uniforms and which ones are in dire need? Now this is one thing they don’t have to worry about.”

The school will pay for a couple extra jerseys just in case one is damaged or for call-ups around tournament time, but it will be a drop in the bucket compared to what it would have been to get all the stuff on a tight athletic budget.

As for the soon to be old varsity jerseys, well, those will be passed down to the junior varsity ranks to wear.

“It’s like the hand-me-downs in a family,” O’Brien said.

But you know what they say, one man’s trash is another man’s treasure.

For more on the Frank Monahan Foundation, visit frankmonahan
foundation.org.