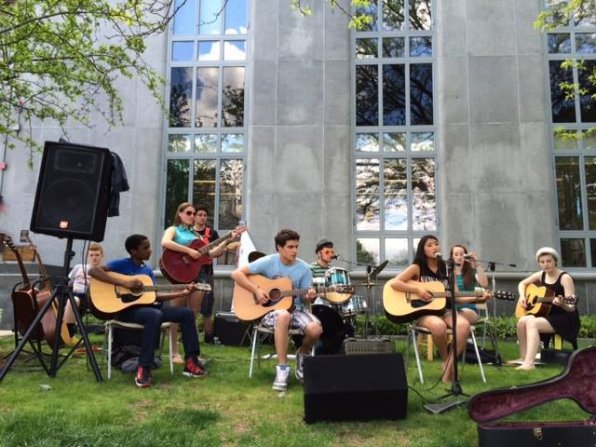 So we just want to paint a little picture for you – using words, of course.

It’s a weekday night and you’re down by the library. All of a sudden you hear music around the corner and catch the sweet smell of hot dogs and pizza. Of course, you have to check it out.

And what you’ll see is not only a band set up in the middle of Prince Street (the one that stretches from Green Street to North Spring Street between the library and the Audi), but people sitting on blankets and chairs in the grassy area just enjoying a nice summer night in the state capital.

But don’t worry about the band’s safety, because new to the library’s Live Music on the Lawn series is the fact that Prince Street will be shut down to traffic during the festivities to give it a cool new feel.

“It just sort of morphed into having a block party atmosphere,” said Deb Baker, adult services manager at the library. “People can bring their blankets and spread out.”

There will be four concerts this summer, beginning with Occasional Piracy, the Parker Academy Ensemble, on June 16, starting at 6 p.m.

“It’s very cool to do something like this,” said Dave Parker, founder of Parker Academy. “A lot of the kids in this band never played music ‘til they got here, but they play some good music.”

And those delicious smells filling up your nose and making your tummy rumble are from Puppy Love Hot Dogs and Constantly Pizza, so if you don’t feel like cooking on the night of the concerts, just have dinner while enjoying the sweet musical sounds. Arnie’s place will also be serving up ice cream, because what good is music and dinner without dessert?

The music is free, but the food and ice cream will cost you a little money, so don’t forget your wallet because it won’t be all that fun watching people enjoy the good stuff while you go hungry.

The Live Music on the Lawn series started last year, but was setup in front of the library, and more often than not people were standing on the sidewalk because there’s not a lot of green space out there.

“Last year we sort of just dove in,” Baker said. “But it went well and people really seemed to enjoy it. It clued us into the fact that we were on to something.”

In order to keep them coming back, Baker thought they should enhance the experience. So over the winter this idea came up, and thanks to a grant from the CPL Foundation, you’ll now be able to listen to music being played in the middle of a street.

“Live music is kind of become Concord’s thing,” Baker said. “It’s a variety of music and definitely for the whole family.”

In addition to Occasional Piracy next week, Odds Bodkin will perform on June 30, the N.H. Ukeladies return to CPL on July 29 and the Whit Symmes Trio finishes off the summer performances on Aug. 11. All performances are at 6 p.m.

“It’s rain or shine, but if it’s raining, we can’t get electrical equipment wet so we’ll bring them into the auditorium,” Baker said.