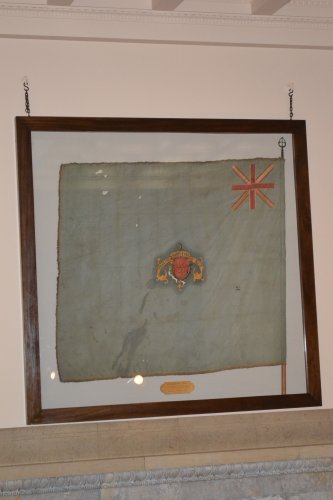 The stains alone prove just how old this flag is, but just to be sure, the N.H. Historical Society has put its stamp of approval on this hand painted silk creation. 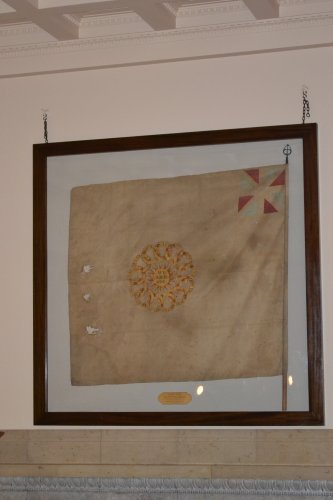 ‘WE ARE ONE’ is the slogan for this flag belonging to the 2nd N.H. Regiment Continental Army, and coincidentally is the same thing we say before leaving the office each day.

Usually, a game of capture the flag results in one side holding on to the aforementioned piece of fabric for only a short amount of time. And that’s because typically it means the start of a new battle.

Although the same cannot be said about the Revolutionary War (or any war for that fact.) So when the 9th Regiment of Foot, British Army commanded by Lt. Col. John Hill captured two flags belonging to the 2nd New Hampshire Regiment Continental Army at Fort Anne, N.Y. on July 8, 1777, there was no giving them back. In fact, Hill took those silk and hand painted creations back to England with him as a memento and set off a sequence of events that has only recently been completely recreated.

But before we pe too far into detail, we want to let you know that the flags are safely back in N.H. and have been since Edward Tuck purchased and donated them in 1913. They are housed at the N.H. Historical Society’s headquarters on Park Street, which Tuck funded, and are nicely framed and hung on either side of the main staircase. So don’t go buying that plane ticket to England in search of the early N.H. war memorabilia. They’re only a short drive away.

“It was for the people of New Hampshire and the historical society,” Balla said. “Edward was proud of his N.H. history and his family was prominent in it.”

One of the flags is a yellowish color with a sunburst of 13 rays. ‘WE ARE ONE’ is painted in the center with 13 connecting circles around with the name of each colony painted on it. The other is blue with a central cartouche, red shield and gold scrolls on either side, containing the regiments name and the phrase, ‘THE GLORY NOT THE PREY.’

“I don’t know if there are any other New Hampshire flags from the Revolutionary War that survived,” Balla said. “These are rare and important.”

Just within the last month, Balla finally put together the final link as to how Tuck was able to purchase the flags. It was well known that Hill took the flags back to England and that they stayed within the family for many years. In 1907, the flags were located by author Gherardi Davis while doing research for his book, Regimental Colors in the War of the Revolution. It set off a five-year of back and forth about the sale and purchase of the flags with George W. N. Rogers.

“There’s a long trail of letters in the file we have,” Balla said.

But until recently Balla didn’t know how Rogers was part of the Hill family. All he had to go with was a cryptic quote from an early 20th century book. Now you know how some of our stories start. It turns out that Rogers was the grandson of Pearce Rogers, whose first wife was Jane Hill. And you guessed it, Jane Hill (the final link) was the daughter of Lt. Col. John Hill.

“The people are as important as the object itself,” Balla said. “The further back I went, the harder it was.”

Now that the lineage of the flags have been determined, the next step is to have them one day (hopefully not too far into the future) taken off the wall and removed from a linen background to see what kind of repairs had been made.

“The story’s not over,” Balla said.