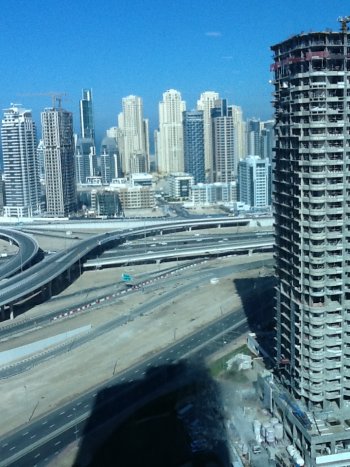 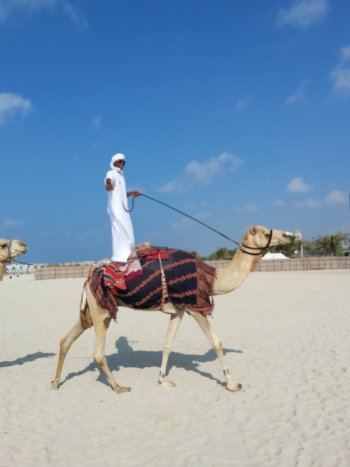 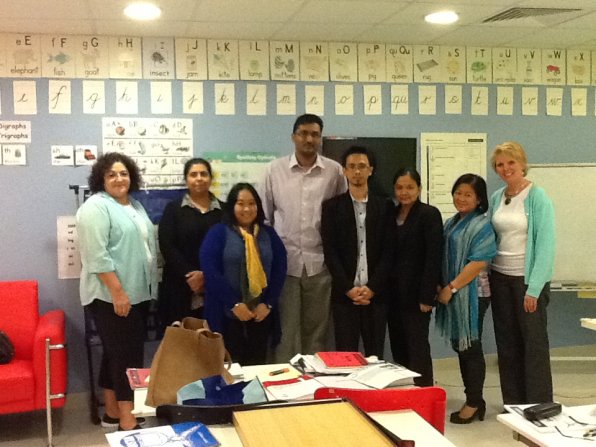 Cheri McManus and Dianne Melim with the Lexicon Reading Center staff in Dubai.

It was a request Cheri McManus and Dianne Melim never expected.

The co-owners and directors of Learn To Read Tutoring Associates in Concord have worked with school districts all over New Hampshire, New England and down the eastern seaboard. So it’s safe to say they don’t mind traveling around.

Yet this contract would require the longest commute of their 10 years on the job – 14 hours, to be exact. And that’s by plane.

The Lexicon Reading Center needed their help. It just so happened the center is located in Dubai and is the first of its kind in the country.

McManus had never used a passport to travel, while Melim’s longest trip was to see family in England.
But after talking with Lexicon last fall, McManus and Melim decided it was an opportunity they couldn’t pass up. So they boarded a plane Jan. 9 for Dubai to begin a year-long training program with Lexicon’s staff. Although, to be perfectly clear, they aren’t staying in Dubai for an entire year. That would be a long time away from home.

“We felt it was such an opportunity,” said Melim. “When else in your life are you going to be invited to Dubai?”

A year is how long it takes to complete the training. There are many steps to the process, and January’s eight-day trip was the first of four journeys to Dubai over the next 12 months.

“Our jet lag was outrageous,” said Melim, citing the nine-hour time difference. “It took us a while to feel normal again.”

Using the Wilson Reading System, a research-based, explicit and systematic method of literacy instruction, McManus and Melim provide teacher training, tutoring and diagnostic evaluations that center on the issue of literacy. And since schools in Dubai, both public and private, aren’t required to provide direct instruction to students who struggle with literacy, that’s why Lexicon called upon LTR.

“It’s a huge need for children who are struggling to get an appropriate education,” said McManus. “So they are able to read and write and perform with their peers.”

It may be the biggest challenge of their 10 years in business. Not only are they working with an organization that is across the Atlantic Ocean, a few European countries and the Mediterranean Sea, but Lexicon’s teachers come from all over the world.

Working with staff members from Australia, India, Pakistan and the Philippines, almost all of whom consider English their second language, there can be a language barrier.

“A lot of them are providing instruction to students who use English as their primary language,” said McManus. “And it’s a challenge to teach teachers when the English language is not their first language.”

But what the teachers lack in language experience, they more than make up for in work ethic and willingness to learn. They all have teaching degrees from schools in their home countries and truly want to help. The center works with about 50 students, some in a school setting and others at the center.

“They’re hugely motivated,” said McManus. “They want to learn and digest what we’ve been working on.”

So it’s up to McManus and Melim to ensure the teachers have the tools to help the students keep up in school. That’s why it takes a year to get things in order.

“My job is to help them understand so they can teach it to the students,” said McManus.

Prior to the trip, the LTR co-directors researched the staff members. They wanted to see where each stood in terms of the English language. To their delight, all were testing at the college level. It gave them a chance to plan and make the best use of the first session – which has set the foundation for the next year.

“They’re so willing to learn,” said Melim. “The work ethic is amazing.”

On Feb. 24, McManus and Melim will again board a plane for Dubai. And let’s just say the excitement is building.

Since they left, the Lexicon staff has been participating in an online course, watching videos and working through scenarios. It’s a continuation of what McManus and Melim taught, and they’re are eager to see what’s changed. Especially when it comes to the interaction with students.

“We’ll be observing them and implementing the lessons,” said McManus. “They’ve begun the process and we’re anxious to go and see how they’ve progressed.”

In April, Lexicon will provide video lessons for review, and six months later, McManus and Melim return to Dubai for another work intensive session. More lessons will be sent in December, while the final trip will be next February.

“It’s just something different than we’ve ever done,” said Melim.

Typically they will visit a school every few months to track the progress, but it’s just not possible given Dubai’s distance to Concord.

But it has afforded McManus and Melim the opportunity to visit a new part of the world. Since neither knew a whole lot about Dubai, there was some research done prior to visiting.

They had been asked to demonstrate cultural respect, which included covering certain body parts and adhering to some interesting customs. There were separate women waiting areas in the airport where they had to stand while men sat. One man wouldn’t even get on an elevator with them.

“Instantly upon arrival we said we had to get in tune with the culture,” said McManus. “It was really eye-opening.”

And while the way of life was a bit of an adjustment, the beauty of Dubai instantly captured their attention. It’s home to the world’s tallest building and some architectural marvels. Did we mention the crisp, blue water, expansive beaches and camels? Seems like a place the Insider would like to visit.

Proper education is important to McManus and Melim. It’s why they got into this line of work. It’s also why they were willing to fly halfway across the world to help. They just never thought their business in Concord would one day go global.