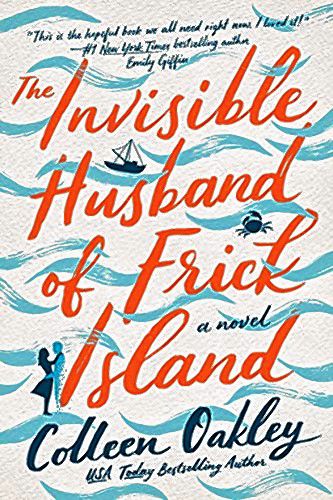 The Invisible Husband of Frick Island

Piper Parrish is a beautiful young widow living on Frick Island. Her husband Tom’s crab boat went down at sea, and his body wasn’t recovered. Stunned by grief, Piper carries on with life as if Tom is still alive and with her. Piper still cooks Tom breakfast, talks to him, and walks down to the boats with him every morning. Everyone in the small town goes along with it, talking to Tom as if he was there beside Piper.

Anders Caldwell is a young reporter at a small newspaper on the mainland and wants to make a name for himself. He’s assigned fluff pieces, like the Cake Walk on Frick Island. When he gets there he finds a community full of eccentric characters. Anders has a podcast, and starts to interview people on Frick Island, a tiny island out in Chesapeake Bay, without cell service and very limited Internet access. Anders thinks at first that there’s a story about a cell tower controversy, but soon finds out the town’s secret about Piper’s invisible husband. He starts putting this story up on his podcast, and suddenly he has more and more readers.

But what will Anders do when the Island gets better cell or internet service? Is it right for Anders to be writing about Piper’s mental health without her knowledge or consent? What if someone calls Piper from the mainland about it?

As I read this book, I was upset with Anders because he didn’t seem to care about the people that he was writing about. He just wanted to be famous and have readers. And then he was too cowardly to tell the townspeople what he was doing.

But Anders starts helping out around the island, and his character grows. Pearl Olecki tells Anders, “It’s amazing what people will do for the ones they love.” The townspeople and Piper have minds of their own, and are not shy about telling Anders what they think. But Anders keeps trying to learn about the island, and trying to understand the people who live there.

This is an interesting story about grief, friendships, and a community committed to helping each other. It’s an unusual story, and I was drawn to the characters. I wanted to know what happens to Piper, Anders, and the others on tiny Frick Island.