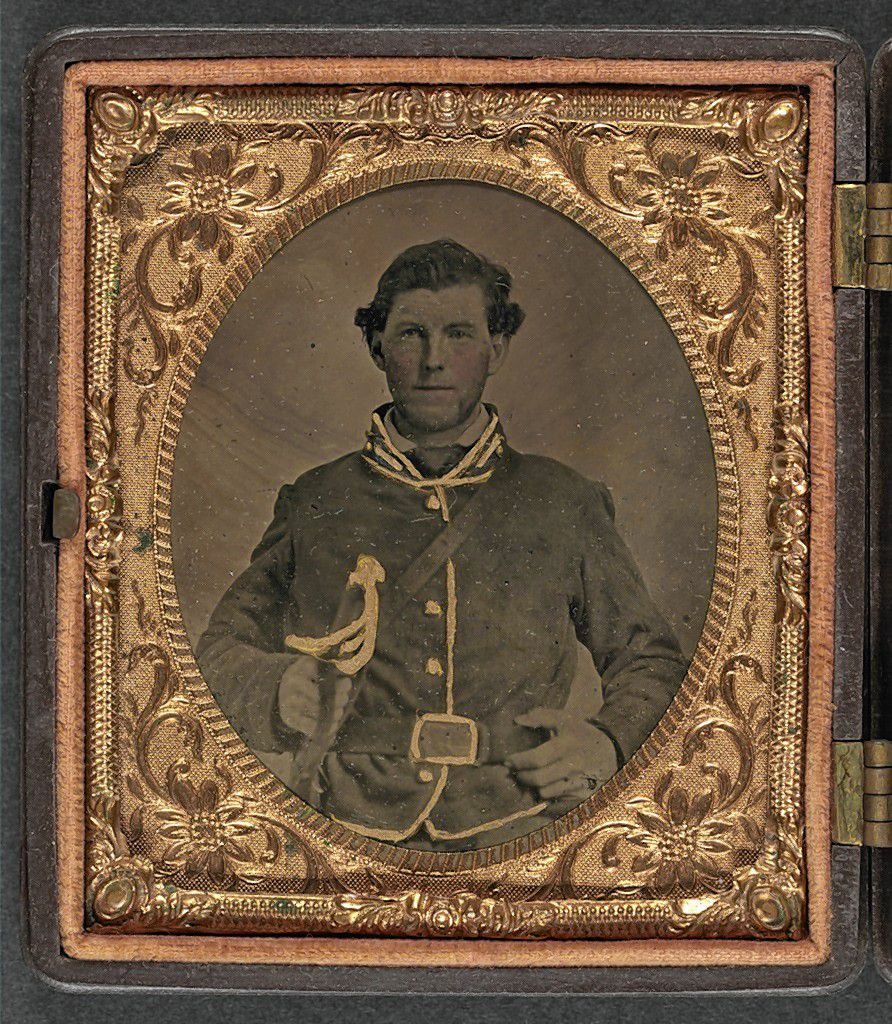 A confederate soldier Library of Congress

The winter snow was melting, the cold water flowing freely along in the brook. After a long winter the spring of 1865 finally arrived and the conflicts between the Union and Confederate soldiers seemed to be concluding. Some of the last Confederate soldiers left were scouring the cities for valuables as others were simply pleased to quietly leave the north and return to what might be left of their homes in the south. A detail of Confederate soldiers was assigned to guard the remaining assets piled neatly in an old wagon covered in canvas tarps. The tired men guarding the wagon were not aware of the contents, which included small chests of gold bars reserved for use by the last of the Confederate Army.

The New Hampshire Regiment soldiers patrolling deep in the woods in March of 1865 were also weary. They were running low on provisions and in pursuit of Confederate soldiers still making a stand against the Union Army. Near the Mason Dixon line there were some skirmishes but they were resolved quickly with soldiers surrendering in need of food and medical attention. One of the volunteers that was recruited into the Union Army Regiment from New Hampshire was a young man named Martin, eager to serve but as weary as the rest of the soldiers. He was disillusioned but thankful the war was in the final chapter. He simply wanted to return to Concord and resume his life surrounded by family.

As the New Hampshire Regiment moved through the forest they heard distant voices and moved forward quietly, Springfield rifles affixed with bayonets in anticipation of one last battle with the remaining Confederates. Martin was at the front and ready for a battle that never began, taking the Confederate soldiers prisoner and confiscating the small wagon so closely guarded.

This is where the story, handed down a few generations, does grow a bit foggy. Martin did return to Concord safely after the war a very wealthy man. He held his new found wealth secretly for he was a private man. He lived in the forest surrounding Concord, worked the rest of his years on Rattlesnake Hill in the granite quarries and never spoke openly about his wealth. When he passed away his son assumed the same role, inherited the homestead and lived very well. The next generation followed the last and also enjoyed a life with leisure. The family acquired wealth from the Confederates that day in March, 1865 in the form of Confederate gold bars. The gold was somehow transported back to Concord and buried at the old homestead just west of the town. As needs arose another gold bar was simply dug up and used to provide for the family, a tradition that lasted for generations until there were no more heirs left and the lore of the lost Confederate gold became a legend.

The last anyone heard about the Confederate gold bars in Concord was early in the 1900s when the last of Martin’s great grandchildren passed away. The seasons claimed the old cabin and the forest reclaimed the hillside until it was unrecognizable. Each season added another layer of fall foliage and soon the words were no longer spoken. The story became a legend and soon a lore. People did not speak often about Martin anymore and when they did most of the story was fabricated.

To this very day, just west of the town of Concord a fortune in gold Confederate bars may be buried in the rich soil. A wealthy fertilizer that may be discovered some day, or not. You might ask me how I heard about this legend of the Confederate gold in Concord. I will mention to you that I heard the story from my father, and he heard the story from his father. Martin was a good Irishman and shared his story one night around a campfire with his best friend, another gentleman also named Martin. His friend was Martin Spain and he carried the story of the buried gold with him and passed it down in his own family.

Martin Spain was my great, great grandfather. A very honest man with a good story.

… seemed to be quite wealthy too.