Lakes Region: No shortage of places to grab a bite or a pint

Home » Articles » Lakes Region: No shortage of places to grab a bite or a pint 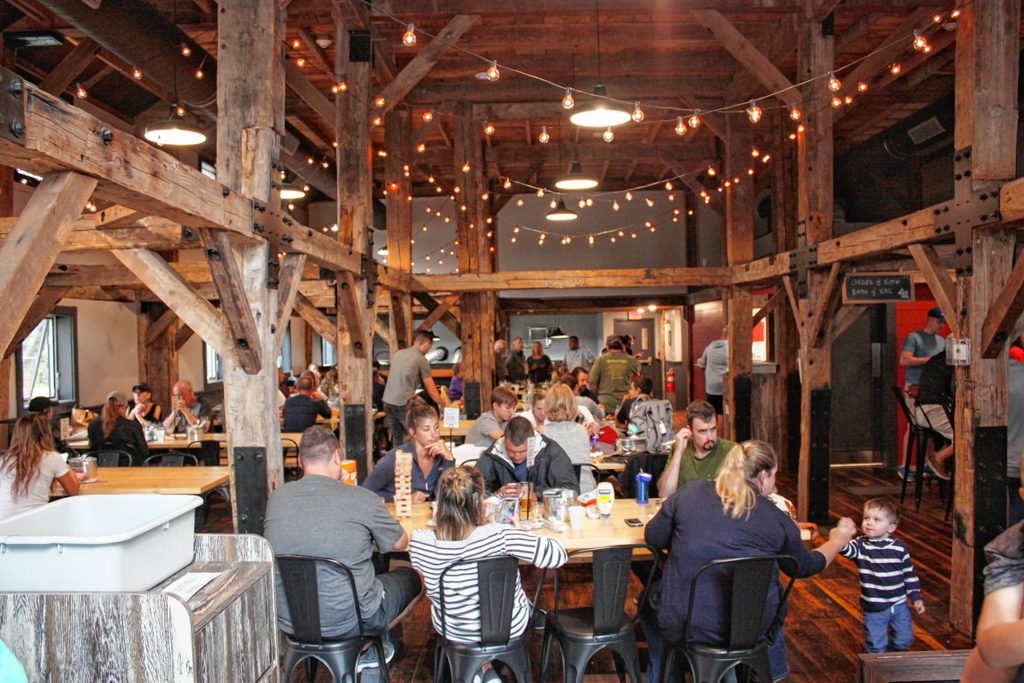 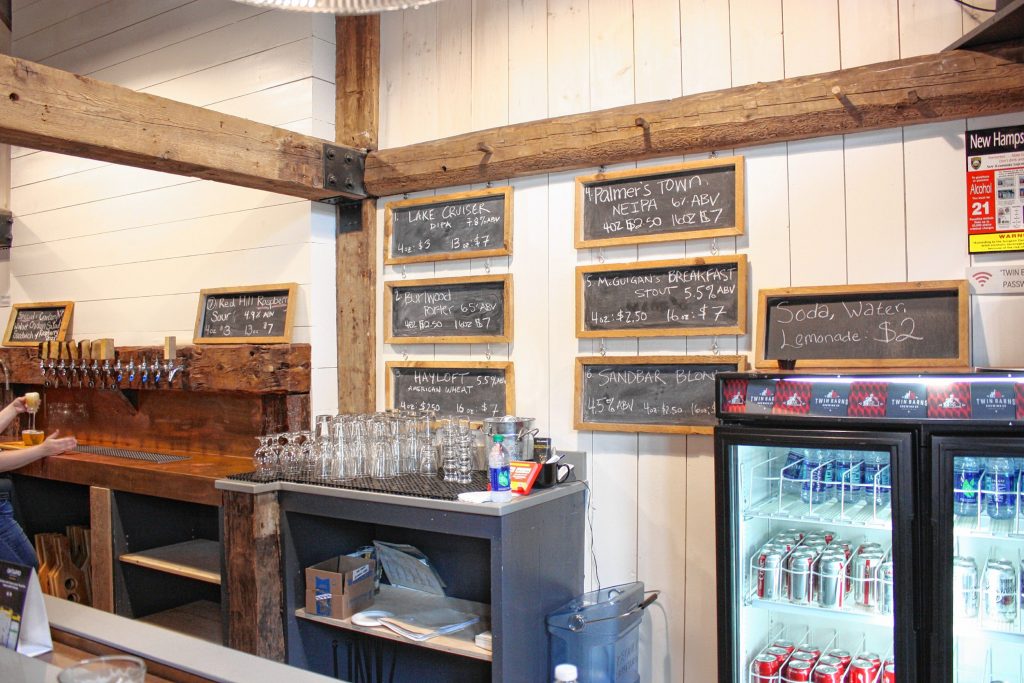 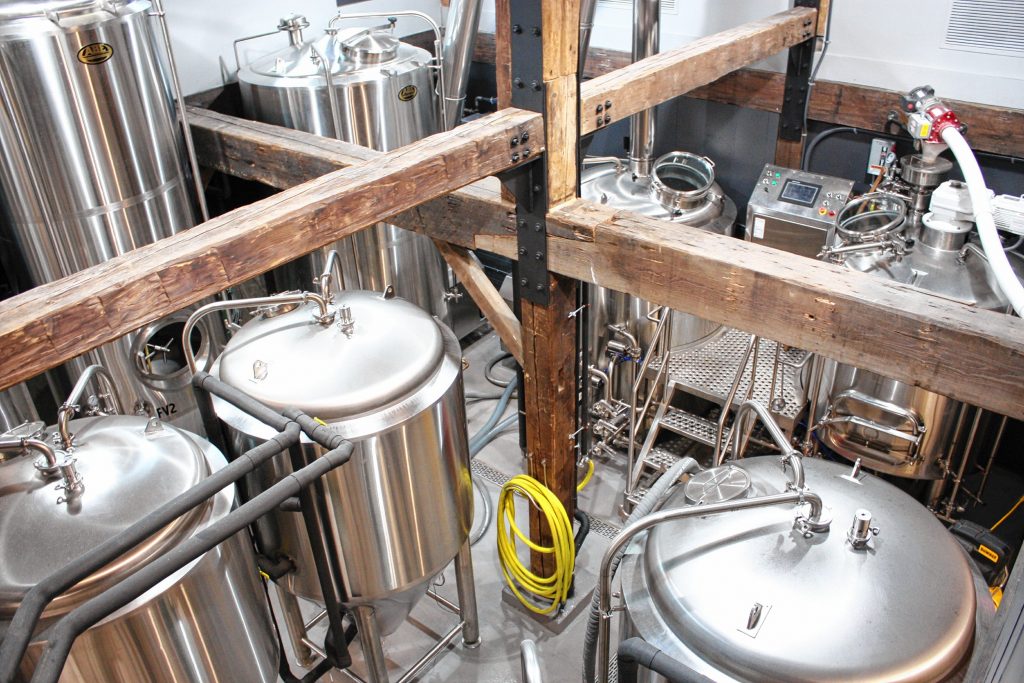 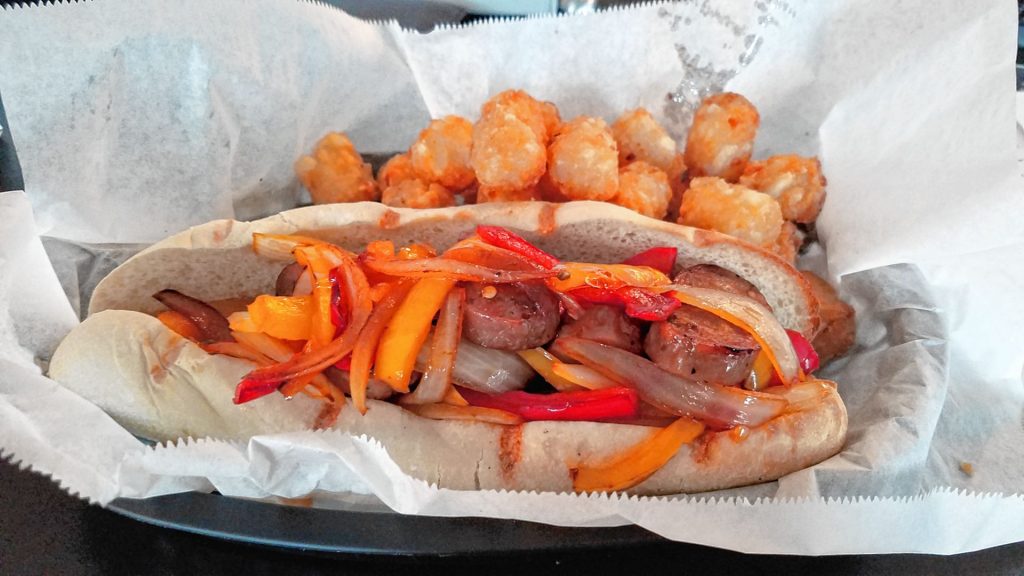 We got a sausage sub with peppers and onions at The Looney Bin in Laconia. JON BODELL / Insider staff 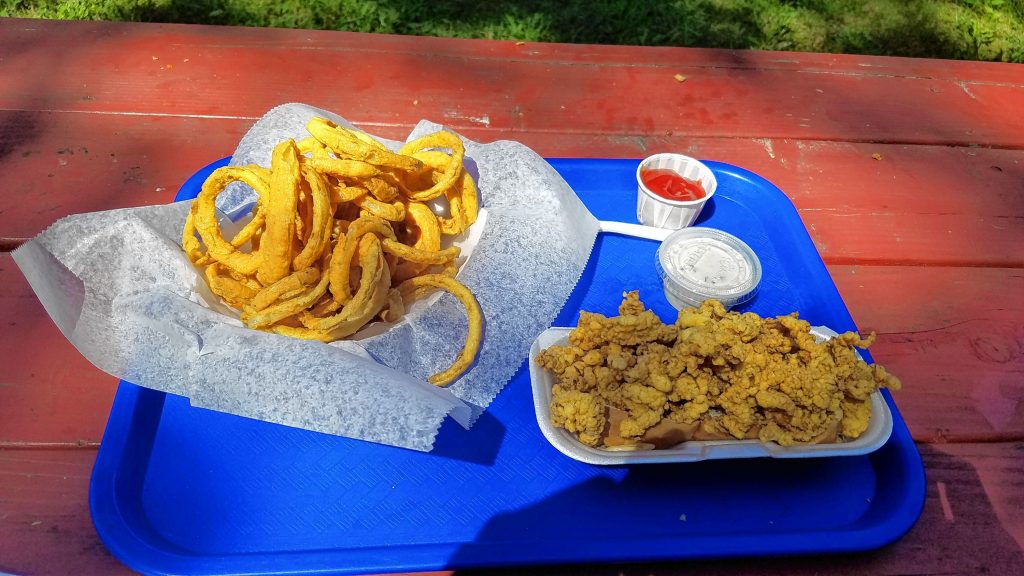 We had to try some of the famous seafood at Tamarack in Laconia. This clam strip roll basket was overflowing with deep-fried goodness. JON BODELL / Insider staff 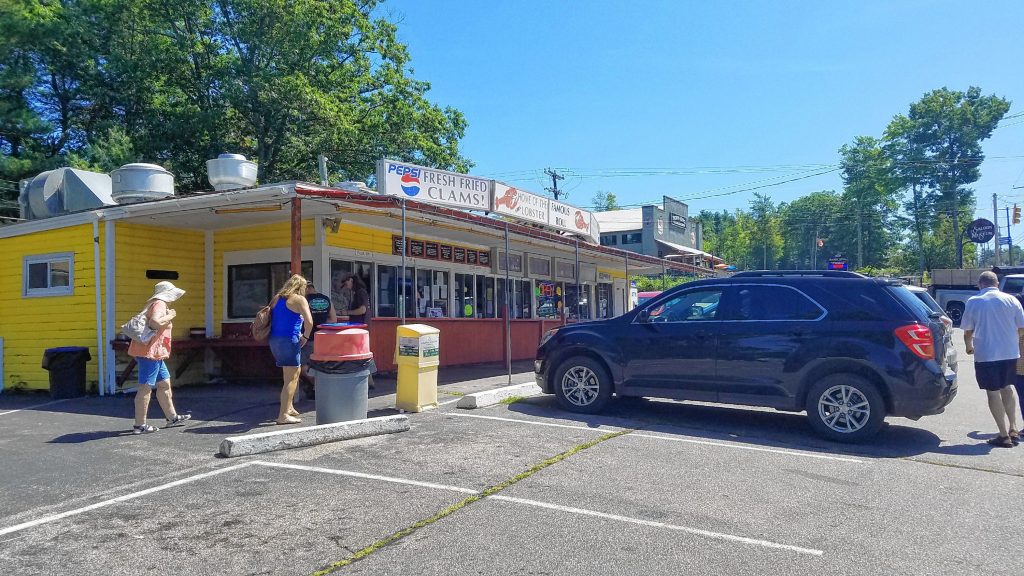 We had to try some of the famous seafood at Tamarack in Laconia. This clam strip roll basket was overflowing with deep-fried goodness. JON BODELL / Insider staff

As everyone knows, the Insider has always been a big proponent of eating, especially on a Field Trip. Luckily, the Lakes Region has more than enough options to choose from on this front.

While there are plenty of big, fancy restaurants to choose from – most of which are probably great – we’re always on the lookout for places that are a little different and might have something unique about them. We found a few places that fit the bill.

On the way to another destination on this trip, we noticed a drive-up place on Route 3 in Laconia called Tamarack whose sign was a big lobster with its claws up in the air. There was also a big crowd in line and many cars in the driveway, so we knew this must be a good place to check out.

Tamarack is one of those classic New England drive-up seafood shacks, featuring lobster rolls, fried clams, scallops, shrimp, onion rings, fries and other similar items. Everything is made to order, so while it might take a little longer than some other places, you know you’re getting fresh, hot, just-made food.

While it doesn’t look like much from outside, Tamarack has definitely established itself as a destination of the Lakes Region. Signs above the ordering windows make claims such as selling more clam strips than anyone else in the Lakes Region. It’s also been visited by the Phantom Gourmet and other publications. Now they can add the Insider to that prestigious list.

While I do love a good lobster roll, I was in the mood for something fried on this particular day, and after reading the sign about all the clam strips they sell, I figured I should try some. There was an option for a clam strip roll basket, which comes with a side, so I ordered one of those with a side of onion rings.

After waiting only about 5 minutes, my order was ready, and it looked fantastic. The lightly toasted hot dog roll was absolutely bursting with big clam strip pieces, so much so that it didn’t seem possible to eat it like a hot dog. The basket of onion rings was also enormous for a side, and these were the super thin, super crispy, super good kind of rings that most strive for but few pull off.

The first challenge was figuring out how to bite into the clam strip roll – there were so many strips it was hard to even pick the thing up without spilling. After letting a few strips fall out and land in the little hot dog tray, it was possible to take the first bite. This was loaded with big, tender, crispy clam strips, and it was a delight to bite into. Every strip was tender – there’s nothing worse than eating clam strips that have been sitting under a heat lamp for an hour, getting all tough and chewy. Every single strip in this roll was as tender and easy to eat as the one before, and the batter was light enough that it didn’t feel greasy or heavy or burdensome.

The rings were also fantastic. Again, the light but crispy batter provided excellent crunchy texture without bringing too much heft and grease. I have always preferred the thin and flaky kind of onion rings over the fatter and smoother kind, and these certainly did not disappoint.

Back to the clam strip roll. After a couple bites I added some tartar sauce, which was served with the roll without having to request it, which was nice. This sauce was thicker than most tartar sauces, but it went perfectly with this roll. After a few bites, it became easier to hold onto and eat, as random pieces would fall off allowing the bun to close a little more.

Ultimately, there was so much food that I didn’t even finish the onion rings. The clam strip roll, on the other hand, was polished off cleanly.

If you’re in the mood for excellent fried seafood in the Lakes Region, you have to give Tamarack a try. They don’t have an official website (fitting for a small mom-and-pop operation like this), but you can find them on Facebook by searching for Tamarack Drive In Restaurant. Your best bet, though, is just stopping by at 691 Endicott St. (Route 3).

One of the newest businesses in the Lakes Region, Twin Barns Brewing is also already one of the most popular, judging by the full house we walked into last Tuesday around 1 p.m. The brewpub on Route 3 in Meredith (194 Daniel Webster Highway) is barely a month old, but they’re already packing the house in the middle of the day on a Tuesday (the pouring rain on this particular day may have had something to do with it).

The name of the business is derived from the history of the building. The building actually consists of two old barns – the front barn is from 1850 and the adjoining back barn is from some time in the late 1850s. They were moved from Moultonborough and Meredith Neck, respectively, by a farmer in the 1930s, and most of the original structures of each barn remains today.

The old architecture really makes the whole aesthetic of the brewpub. The tall ceilings, huge exposed beams and wide pine flooring really give the place an old barn feel, and the string lighting running throughout adds a cozy, homey feel to it. That’s by design.

“We’re trying to make it like your living room,” said owner Dave Picarillo. That’s why you’ll see a collection of board games and playing cards to choose from, as well as picnic-style benches that can fit a whole family. In fact, for being a craft brewery, which is often the type of business that attracts only adults, Twin Barns is very family-friendly, as evidenced by all the kids that were there last Tuesday.

One of the big draws for families is the food. Since New Hampshire requires all drinking establishments to serve food if they intend to sell full pours of alcohol, many startup breweries tend to offer some bare-bones food options just to get by the regulations. At Twin Barns, they take the food seriously, with two chefs constantly pumping out high-quality yet simple and recognizable meals.

Comfort food is the theme of the menu, with items like mac and cheese, pizzas, burgers, meatloaf and chili. They also do food specials, often meant to pair with a certain beer.

On the beer side, they do everything right there – you can even walk to the back of the dining area and look down at the whole brewing operation. There are currently seven beers on tap, with six staples and one specialty. There is room for up to 12 beers to be on tap at once, and Picarillo said the plan is to have that many available very soon.

Since I was there anyway, I figured I should try some of this beer – for science. I ordered a flight of four, featuring Red Hill Raspberry Sour (the special beer), Palmer’s Town IPA, Hayloft American Wheat and McGuigan’s Breakfast Stout.

The sour was tart and perky, with a deep-pink hue to it that was like a darker version of ruby red grapefruit juice. This one had some pucker to it, but not to an overwhelming extent.

The IPA was bright and hoppy, with a pleasant, pungent aroma that was easy to pick up. This was hazy and very light in color, and pretty mellow in taste. Unlike a lot of IPAs, there was very little bite to this, which made it easier to drink.

The American wheat is like a take on Sam Adams Summer Ale. The Twin Barns version tasted a bit more flavorful and hoppy, and at 5.5 percent alcohol by volume, it felt a tiny bit stronger than the Sam.

The final sample was the stout. This beer is named after that farmer who moved the barns here in the ‘30s, McGuigan, so there’s a little nod to history in the name. The beer is dark and robust, and it had a mellow toastiness to it. Roasted malt and a little bit of coffee made up the bulk of the flavor profile, and it smelled exactly like it tasted.

When you see a place called The Looney Bin, you go in – it’s just a rule. This small biker bar is right across the street from Funspot, and while that arcade is a great destination for families, you might not want to take your kids or your grandma to The Looney Bin.

The bar and grill is decorated with signs and stickers with slogans and jokes we can’t print here. They also have a big board listing dozens of signature shots, most with names we also can’t print. Some of the fit-for-print names of the shots include Yellow Snow, Dirty Leprechaun, Pucker Sucker and Surfer on Acid. That’s pretty much all the names we can mention here.

Luckily, though, I wasn’t in there for a drink but for a bite to eat. The menu is small and simple, so I went with a sausage, pepper and onion sub, with a side of tater tots. It came out quickly, and it did look very good.

I started with a couple tots, and they were much better than I expected. They were very crispy and hot, tasting like they were made fresh right there on the spot. After a few of those, it was time for the sub.

The sausage slices were cooked nicely and seasoned lightly – this was the sweet, not spicy variety. The thinly sliced onions and peppers went nicely with the sub, and the bread was pretty good too. Nothing to really go crazy about here, but if you’re looking for a good, quick bite, this will do the trick.

(See the next page for a feature on another adult beverage.)